Many of us would probably be familiar with Chef Benny Se Teo, the co-founder of Western food chain Eighteen Chefs and grilled meat specialist The Meathouse.

Apart from being a successful restaurateur who makes it a point to provide ex-offenders with job opportunities, the man is also known for his wacky sense of humour.

Yesterday (Nov 23), the boisterous chef took to Facebook to announce that he has left both Eighteen Chefs and The Meathouse.

Explaining that he is retiring, the 61-year-old said he "left the company on a good note".

In the heartfelt post, Benny said that he had already left both the restaurants "a little over some weeks ago" and is slowly getting used to having more free time on his hands.

"At this stage, I'm just learning my way around this thing called retirement and enjoying the sensation of the very first 'taste of freedom' I've worked so hard to earn," he shared.

It has also garnered more than 670 comments wishing him a happy and restful retirement.

One netizen even left a comment to thank Benny for helping ex-offenders like himself achieve great things in their lives.

A man who believes in second chances

Some may wonder why Benny has spared no effort to advocate for ex-offenders. The reason is that he was once in their shoes.

"I hire ex-offenders because it is something very close to my heart," he shared with The Straits Times in a 2014 interview.

Before becoming the successful restaurateur that he is today, the secondary school drop-out struggled with heroin addiction and spent more than a decade in and out of prison and drug rehabilitation centres.

In 1992, a near-death experience involving intestinal ulcers and a spiritual awakening made him decide to turn over a new leaf and live "like a normal person".

Read Also
'We just need someone to have faith in us': Bak kut teh boss gives ex-convict second chance in life 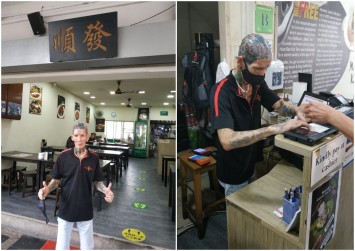 After finally being released from prison in 1993, Benny went for six job interviews but no one would hire him because of his past track record. This made him decide that if he were to ever start his own business, he would make it a point to hire ex-offenders and give them a second chance.

And he did just that.

After a failed attempt to open a Chinese restaurant called Goshen in 2005, Benny pressed on and eventually opened Eighteen Chefs in 2007, naming it after a gang called Eighteen that his father used to belong to.

While the chain restaurant has had its ups and downs, it has grown to become a household name with ten outlets scattered islandwide.

Things were going so well for Benny that in 2018, he decided to open The Meathouse under the Eighteen Chefs' name, which specialises in premium cuts of steak.

And now, after achieving so much in the past decade, it's seems like it's finally time for Benny to hang up his apron and take a well-deserved break.