Hawker Vicky has resisted raising prices at The Flying Pan in order to keep things affordable for families struggling with inflation.

These days in Singapore, everything is going up.

The temperature, our blood pressure and of course, food prices.

Who can forget about the $12 plate of cai png from a Jurong West coffeeshop?

Instead of upping their prices in the face of inflation, the year-old stall continues to offer a main and three side dishes for just $5.50!

Run by couple Vicky and Sean, the Western food stall is located in a coffeeshop along Hougang Ave 2.

However, Andrew mentioned that Sean doubles up as private hire vehicle driver in order to support their three kids.

Thus, leaving only Vicky to man the store on some days.

Though things can get a tad hectic, the 23-year-old gets help in the form of their oldest son who "helps out after school and on weekends" according to an interview with news platform Oriental Daily.

Add on the fact that Vicky and Sean are planning to get hitched next year, it's commendable that they are sticking to their low prices in the face of incoming wedding bills.

So why are they sticking with their $5.50 price tag? 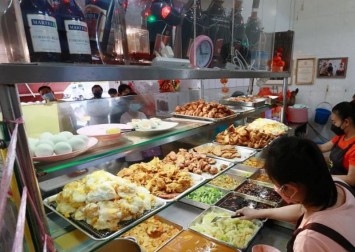 Vicky explained the reason behind that is to attract a higher volume of customers even if it means slimmer margins.

In the same interview with Oriental Daily, Vicky shared that business has been down 20 per cent since April.

She credited the dip in business due to the reopening of the borders which resulted in more people travelling aboard.

The other main reason for not increasing their prices is because the couple want to make their food affordable for struggling families out there.

"There are families out there that are also trying to make ends meet," said Vicky.

The selfless statement drew praise from Andrew who was impressed by Vicky's "determination and her belief" despite her young age.

But Andrew wasn't just impressed with Vicky, but also her food as well.

He had the grilled chicken chop and said the taste "is much better than many others out there".

However, it was The Flying Pan's chicken wings that were Andrew's favourite.

Describing them as "deliciously good", he remarked that they were "crispy on the outside and juicy inside".

The positive sentiments didn't end with Andrew though, with many sharing how much they love The Flying Pan Western food.

One commenter called their ribeye steak "nice" and remarked how tender it was that it "can [be] cut using the plastic knife".

Another netizen who is an existing customer commented that the generous portions and affordable price made it "worth the money".

It's good to see Andrew's post having an immediate effect in creating awareness for The Flying Pan with another netizen - who frequents the same coffeeshop – pledging to "give this stall a try".