US YouTuber raves about Singapore's McSpicy, calls it the burger to end all #ChickenSandwichWars

Popular US YouTuber Mikey Chen has one thing on his must-eat list when he sets foot on our sunny island. Surprise, it ain't chilli crab.

In fact, it is our humble McSpicy that has captured the tastebuds of the intrepid American-Chinese food vlogger, who tried the burger on a previous trip here.

Given the abundant food choices here, ordering McDees in Singapore might be seen as a strange decision — along with the fact that the Golden Arches originated from the States.

But Chen explains in the video caption that he loves trying McDonald's from different parts of the world. And honestly, we understand because so do we.

Through his video, we learn about the "chicken sandwich war" that has exploded in the US. He said: "Of all the McDonald's I've had around the world — Singapore is my favourite one.

If you're curious about what this war is all about, some Googling revealed that various fast food chains in the US have muscled in to grab a slice of the Chicken Sandwich (metaphorical) pie after the success of Chick-fil-A's "original" chicken burger and Popeye's viral creation this year, which sold out in two weeks.

But if Chen were to be the judge, none of them holds a candle to our McSpicy.

The well-known big eater took his love for the fast-food chain up a notch by starting his day with a scrambled egg and sausage McMuffin breakfast, red rice porridge and smiley potatoes. While the muffin passed muster, both the porridge (he didn't expect it to be savoury) and potatoes ("too starchy") failed to impress.

In between his meals at the McDonald's outlet at United Square, he even managed to squeeze in a "transition meal" at Ya Kun and had only great things to say about the chain's kaya toast with soft boiled eggs. In fact, he was positively swooning: "This just ain't your typical eggs and toast, guys".

As lunchtime came around, he finally sank his teeth into a regular McSpicy, lamenting how he should have gotten a Double, no less. And the love he has for our humble burger is palpable:

Other choice quotes in his ode to the McSpicy:

During the same lunch, he also had rave reviews for the crispy fish sandwich, disregarding the "horrible", "sad" piece of soggy bacon buried within, which he eventually pulled out.

Read Also
McDonald's jammies all sold out, Singaporeans not lovin' it 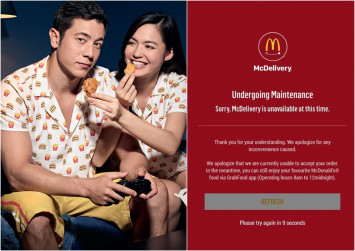 To this, commenters were quick to school the Chinese-American that the "bacon" was, in fact, Halal turkey bacon in this part of the world.

He ends his McDonald's binge-fest with a White Choc Strawberry Cream pie which he enjoyed as well, but not as much as the McSpicy, of course.

"Seriously, when I landed in Singapore, it was like a part of my tongue just started tingling, it basically just needed the McDonald's here, or more specifically, the spicy chicken sandwich," Chen expressed one last time at the end of the video.

We hear you. The dude almost makes us feel incredibly lucky that we're able to have the burger every day if we wished.

#McDonald's #fast food #In Case You Missed It