Vaping and smoking tied to stroke risk in younger adults

Young and middle-aged adults who vape and smoke are more likely to have had a stroke than those who use only one of these types of nicotine product, or none at all, a study suggests.

Compared to nonsmokers, people who both smoked and vaped were almost three times as likely to have had a stroke, even after accounting for other stroke risk factors like high blood pressure and elevated cholesterol, the study found.

People who both vaped and smoked were also nearly twice as likely to have had a stroke than those who only smoked.

"More importantly, contrary to the current ongoing discussion on e-cigarettes being a safer alternative to smoking in young adults, our analysis revealed that switching from combustible cigarette smoking to e-cigarette smoking did not confer benefits against stroke risk at a young age," said senior study author Dr. Rupak Desai of the Atlanta Veterans Affairs Medical Center.

E-cigarettes are battery-powered gadgets that often feature a glowing tip and a heating element that turns liquid nicotine and flavorings into a cloud of vapour that users inhale.

Some previous studies have linked nicotine, flavorings and other chemicals in e-liquids to an elevated heart rate, high blood pressure and an increased risk of stroke, the researchers note in the American Journal of Preventive Medicine.

In the current study, most of the people who only used e-cigarettes were aged 18 to 24, while the majority of participants who only smoked were 35 to 44.

Compared with nonsmokers, people who vaped with or without also using traditional cigarettes were more likely to be obese, binge drink and be unmarried.

They were also more likely to be college dropouts or have no education beyond high school.

Compared with nonsmokers, current smokers had a 59 per cent higher stroke rate while former smokers who currently only vaped had a two-and-a-half-fold higher risk, the study also found.

One limitation of the results is that researchers relied on survey participants to accurately recall and report any history of vaping, smoking or stroke.

They also lacked data on the type of e-cigarettes people used, the severity and timing of strokes, or any medications people took that might impact their risk of stroke.

The long-term effects of vaping are also unclear, and the study didn't look at older adults who are much more likely to have strokes, said Irfan Rahman a researcher at the University of Rochester Medical Center in New York who wasn't involved in the study. 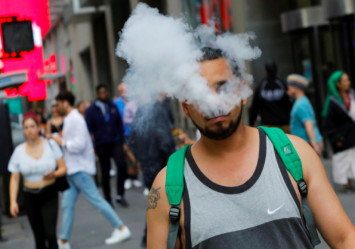 Even when they smoke, young people usually aren't as vulnerable to stroke as older adults, Rahman said by email. Diet quality and stress levels can also dramatically impact stroke risk in younger adults, he added.

While there are a lot of unknowns about the safety of vaping, the current study results suggest that at least from a stroke prevention standpoint, there's no advantage to vaping, Desai said.

"This preliminary data does not support the notion of e-cigarette being a safer alternative to traditional combustible cigarette smoking, therefore, we would not recommend e-cigarettes as a smoking cessation tool until further studies show cessation benefits and protective effects on cardiovascular and cerebrovascular health," Desai said.