Walls of fame: Those IG-worthy murals in Haji Lane

"Walls Of Fame" is a series on Wonderwall.sg that throws the spotlight on murals all around our LIttle Red Dot which bring our neighbourhoods to life, and the stories behind the art and the artist(s).

We've taken a trip around Chinatown to explore the works of probably the most prolific muralist in Singapore, Yip Yew Chong, and seen how the multicoloured murals in Little India are matched only by the vibrancy of the culture and tradition in that neighbourhood.

In this edition, we journey through Haji Lane, an area that stands out for its eye-popping street art and hip culture.

This mural might not have a title, but it’s easily the most famous wall mural at Haji Lane and is synonymous with the vibrant street art scene here.

This intricate work of art was commissioned by the owner of Piedra Negra (a Mexican restaurant) and depicts the indigenous Aztec people dominant in Mexico before Spanish conquest in the 16th century.

The wall is the work of 46-year-old Didier "Jaba" Mathieu, a Colombian-born graffiti writer and street artist.

Many of his works can be found along Haji Lane. His style is highly refined and complex, taking inspiration from his travels and experience as a concept artist and digital matte painter with Lucasfilm.

“Faces From the Past”

This mural, which was created by 35-year-old Mohammad Azlan Ramlan aka Ceno2, depicts the rich heritage of Arab Street and the multi-ethnic identity of The Singapura Club, a restaurant that serves Asian and North Indian food.

Although the old man in a turban takes centre stage in the mural, there are also other icons vital to Singapore’s history such as the Samsui woman.

The diversity of characters in the artwork is an accurate reflection of the nature of the restaurant, as well as Singapore's multi-cultural society.

While Azlan may not be a household name in the local street art scene, he is well-known internationally. He has done hundreds of graffiti works in cities such as Chicago and New York, and has even developed his own style which he calls “Graffiti Fine Art”.

This work is part of Slac Satu’s Batik Graffiti Series inspired by the batik found around the area.

Along this narrow alley that links Haji Lane to Arab Street, there is a batik-inspired piece by Slac Satu and an untitled piece created by the trio of Slac Satu, Myow and Asno at ZNC (which stands for Zinc Nite Crew, which was formed in 1998).

These pieces add an interesting dimension to the monochromatic “Faces from the Past” on the opposite wall.

Considered one of the pioneering graffiti artists who helped elevate the street art scene in Singapore, Slac Satu taps into pop culture for ideas for his bold creations, which usually combine alphabets and batik elements.

The Blackbook Studio is Singapore’s first physical graffiti store and the official distributor of Loop spray paint. It was started in 2011 to encourage and nudge local artists and graffiti enthusiasts in the right direction.

Outside the studio is a self-constructed 14m long wall which serves as a great location and canvas for painting and practising. You can spot fascinating street art by both local and international artists here.

“Bejeweled: An Homage To Kampong Intan”

This mural reminds us that part of Baghdad Street was once a place where diamonds and precious stones were traded. The mural was done up by 40-year-old Sufian Hamri aka TraseOne or TR853-1.

Regarded as one of the leading pioneers of the local street art movement, TraseOne started off by just scrawling his name on the streets. His approach has since evolved to creating a more intellectual dialogue of his art that contains subliminal messages.

"Bejeweled" was commissioned by the National Heritage Board for the Singapore Heritage Festival 2019 and is one of his most challenging projects, from the logistics of planning the project to the 36 hours he was given to complete it.

Have you visited Gelam Gallery? Bringing you brand new OOTD spots right here in our precinct 😍 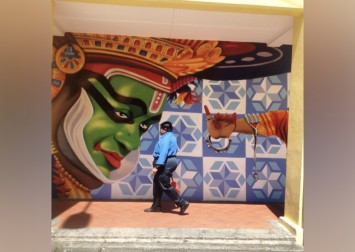 Separated by Bussorah Street that leads to the mosque are two parallel back alleys named Muscat Street. This is where you can find Singapore’s first outdoor art gallery, Gelam Gallery.

This extraordinary concept showcases murals and framed works of more than 30 artists from different backgrounds, newly graduated students from NAFA and LASALLE College of the Arts as well as experienced local and foreign artists.

Framed pieces hang alongside wall murals and commissioned graffiti. The art ranges from colourful modern pieces to works reflecting the culture and heritage of the neighbourhood.