We sample some of the newest Singapore craft beers on the market, and here's our verdict

Mention Singaporean beer and most people will immediately think of the ubiquitous Tiger beer available at any kopitiam or convenience store. But true beer enthusiasts will know that Singapore actually has a vibrant craft beer scene.

CRAFT BEER IN SINGAPORE - FROM ATAS TO ACCESSIBLE

What exactly are craft beers? An alternative to beer from huge commercial brands such as Guinness and Budweiser, craft breweries are usually small, independent and traditional. The result is high quality beer with unique taste profiles.

But in recent years, there's been an explosion of entrants to the craft beer scene, with at least six new-to-market brands. Among the more famous names include Brewlander, co-owned by well-known Singapore personalities Allan Wu and Daniel Ong. 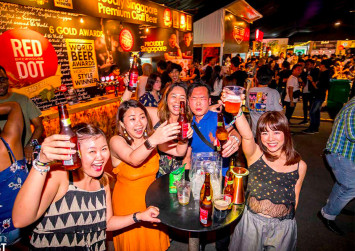 As a result, there's no shortage of places to knock back a pint or two, from upscale bars in town like Takumi at Mandarin Orchard Hotel, known for their Japanese craft beers, to Druggists on Tyrwhitt Road, which regularly rotates a whopping 23 international craft beers on tap .

One can also enjoy a uniquely Singaporean experience at Smith Street Taps and 3rd Culture Brewing Co. which have set up shop in hawker centres.

If this has piqued your interest in craft beers, over 600 craft and specialty beers will be showcased at Beerfest Asia from June 27 to 30. These include home-grown breweries such as  Bespoke Brewing, Trouble Brewing, and 1925 Co., among others.

SO MANY BEERS, SO LITTLE TIME

Now that you have a better idea of what's in store for you at Beerfest Asia (BFA), here's a quick cheat sheet on some of the newer local brews that will be there. We aren't experts by any means but we do enjoy a good beer or two. At the AsiaOne office, we took day drinking to a new level by assembling a panel of brave volunteers to try out a small selection of the local craft beers and to narrow down the top choices. Trust us - your liver and wallet will thank you.

Plus, look out for our giveaway below!

Lion City Meadery was started by friends Sanjay and Justin. Sanjay had his first taste of mead during a trip to London in 2013 and was hooked. He started brewing his own mead when he couldn't find quality mead in Singapore. While beer is made by fermenting grains such as barley or wheat, mead is made by fermenting honey. The Classic Mead features prominent notes from a custom blend of eucalyptus honey.

Our thoughts: While the initial taste is sour and reminiscent of vinegar, the sweetness of the honey and fruity notes are very pleasant. It's the perfect drink to wash down some spicy mala hotpot. If you like cider, you will probably like this.

Trouble Brewing had humble beginnings in 2017 in an old bean curd factory, where three guys embarked on a simple mission - to create fresh, locally-brewed craft beer everyone can enjoy… not just beer snobs. Trouble Brewing describes Stolen Boat as a summer ale with sweetness from malt and a short bitter finish.

Our thoughts: This garnered mixed reviews from our panel. While it was smooth and crisp, some felt it tasted a little too light. This might be better for less experienced drinkers.

Founded in 2017, Bespoke Brewing aims to share the joys of brewing through beer and wine. Besides their line of craft beers, aspiring brewers can also try out their wine brewing kits. Their Discovery Golden Ale offers roasted malt aromas with caramel and toffee flavours and a light touch of hop bitterness.

Our thoughts: We found Discovery Golden Ale to be a little dry and more bitter than the other beers on the list. It also left us with an oaky, herbal aftertaste. This is definitely an acquired taste.

The 1925 Brewing Co., founded in 2013, is helmed by three members of the Yeo family, brothers Ivan and Eng Kuang, and their uncle, Yeo King Joey. Yellow Van, a pale ale, is named after the vehicle that Joey's father used to drive. It was designed to be a session beer which is low in alcohol and suitable for drinking over long periods.

Our thoughts: We like this one. Very fruity and refreshing with a slight smokiness. Yellow Van came with smooth foam on the top and had a wheaty aftertaste. Pleasantly light, this is a beer that we can see ourselves drinking over a leisurely lunch.

Liang Teh is another craft beer by The 1925 Brewing Co. Their beers normally retail for $10 to $12 per bottle. Catch them at Beerfest Asia to sample their offerings at a special price of $8.

Our thoughts: This unique beer edges out Yellow Van with its floral notes and hints of lychee. It came with smooth foam on the top and left us with a wheaty aftertaste. It is the ideal companion for a lazy day by the pool while you're munching on chips.

Lion Brewery first began in 1836 on the banks of the River Thames. Despite the brewery being demolished in 1949 after a fire, its legacy has continued. In 2017, Lion Brewery was reborn in Singapore. Founders Ben & Harry honed their craft, brewing from home for four years until they finally perfected their recipe. Lion brewery describes Straits Pale Ale as a refreshing beer brewed for the hot equatorial climate, giving notes of passionfruit, citrus and lychee.

Our thoughts: Straits Pale Ale grabs your attention with a surprising kick on the first taste. We tasted fruity, citrusy notes, and even a slight hint of pepper. We envision this as the ideal companion for food with bold flavours.

The inspiration behind this beer was to create a ubiquitous beer inspired by Singapore, for Singapore, and in Singapore. Singapore Lager was designed to be an easy drinking, refreshing beer that perfectly suits our sweltering weather. Notes in this beer are peppery with grainy, white bread and soft grape to grassy aromas.

Our thoughts: While our untrained palates didn't exactly pick up on the subtle notes, we thoroughly enjoyed this beer. Singapore Lager brings a bubbly and refreshing experience that is light on the palate. This clean and crisp lager would be perfect with chilli crab and har cheong kai.

After downing way too many beers for a work day, we emerged with two clear favourites - the Classic Mead by Lion City Meadery for its sweet notes and Singapore Lager by Trouble Brewing for its delightful lightness on the palate. But don't take our word for it. Try them out for yourself!

Price: $22 to $27 for advanced passes booked online depending on the date (inclusive of one beer).

Three lucky readers will get to win four standard passes (worth $120) each to Beerfest Asia on Friday, June 28. After all, what better to enjoy a night out than with your beer buddies, right?

Simply enter the contest below by answering a simple question (note: participants have to be 18 years old and above).