We're admittedly late to the game when it comes to trying out the chee cheong fun (steamed rice rolls) that local actor Ben Yeo has put his name to.

But can you really blame us when the rice rolls from Singapore Chee Cheong Fun sold out within minutes when it was first launched? That, plus you gotta wait for 8pm on alternate days before you can order them.

Nonetheless, we persevered and managed to land a set, which was promptly sent to us within the two- to three-day timeframe that the website promises.

So what differentiates this particular chee cheong fun from its coffeeshop counterparts? It's the sauces that it comes with.

While most of us are used to having our rice rolls with either a sweet sauce or light soy sauce drizzled on top, this chee cheong fun set comes with a whopping five sauces and a smattering of sesame seeds. You also get ten rice rolls that are tightly packed together in plastic wrap.

The sauces aren't your run of the mill sauces, according to Ben. Aside from the sauces made by Kwong Woh Hing Sauce Factory — who Ben is partnering with to produce this rice roll set — the peanut sauce is made by Li Kwong, which has been making it since 1974, and the special oil mix is made by Artisan Kitchen Foods, according to a CNA report.

If you would like to eat the rice rolls in what Ben considers the right combination of sauces for eating chee cheong fun right, the website provides written instructions to help you get there.

As for warming up the rice rolls, there are two ways to do so: a microwave or a steamer.

It's pretty easy to prepare and we used a microwave oven to heat up our rice rolls, taking care to follow the instructions to include a cup of water inside to ensure the rice rolls don't dry out.

From there, it's just the simple task of cutting up the chee cheong fun into bite-sized pieces and mixing in the sauces. We did have some trouble figuring out which sauce was which, but once we figured out that the labels and ingredients of each bottle were stuck at the bottom of each container, we were good. Of course, we went with the proportions that Ben recommended. 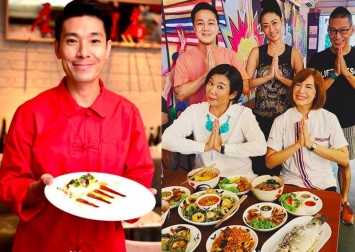 I personally prefer my rice rolls served with light soy sauce to appreciate the silky texture of my chee cheong fun. But the mix of sauces that Ben curated makes for a flavour-packed chee cheong fun dish.

What my colleagues and I also appreciated was that you can come up with your own combination of sauces, omitting what you don't fancy. This meant our vegetarian colleague could have it too after omitting the sauces that had meat or seafood ingredients.

Overall, we all shared the same opinion — we would order again just for the sauces, not so much the chee cheong fun. Not that it wasn't good, but it certainly can't beat freshly made chee cheong fun. It is a good alternative if you can't get to a shop or just want to have good chee cheong fun without leaving home.

The sauces, however, are a different matter and the sambal chilli was particularly good, giving the chee cheong fun an extra kick.

However, the option to just get sauces is currently not available, whether individually or as a set. You can only get them in the $28 set that comes with the ten rice rolls. Note that there's an $7 delivery fee unless you are getting more than three sets.

Said to be a reimagination of a Christmas Roast, the Smokey Chee Cheong Fun set will include char siew sauce, sambal chilli, bacon bits oil, toasted sesame seeds and youtiao puffs. Each set serves up to 4 people and costs $35, and though you can place your orders now, delivery will only kick off from the second week of December.