As much as weddings are supposed to be happy occasions celebrating the ~everlasting love~ between two people, it can also bring out the absolute worst in them.

In this Reddit thread, a user asked, "Wedding planners of Reddit, what did your worst bridezilla/groomzilla do?" and a barrage of horror stories came forth.

Here are some of the highlights in the thread.

1. "Friend is a photographer. Does weddings. Got punched in the face by the groom because the groom decided that the photographer was "taking too many photos of the bride.""

2. "A bride had a meltdown because her friend got engaged as well and was planning to get married in the same year as she was… Apparently it was her special year and not just a day. She threw a huge fit that this girl was only getting married to 'steal her thunder'."

3. "I'm not a wedding planner, but I do work in the industry and my friend is the wedding planner I'm telling this story about. He is a good looking, straight male that has an amazing eye for design and detail. He can do everything from wedding dress design and execution, flowers, you name it. And his services are not cheap. He had a bride who called him up a few days before her wedding and told him she couldn't go through with the wedding because she was in love with someone else. The conversation went something like this:

Bride: I can't marry him, I just don't love him anymore, I think I'm in love with someone else!

Him: What do you mean you're in love with someone else!? Your wedding is in 5 days!

Bride: Well…. I'm in love with you. You just GET me! I've never met anyone else like you!

Him: …Do you know how much your parents are paying me to get you?!

She ended up getting married 5 days later and it was never mentioned again." 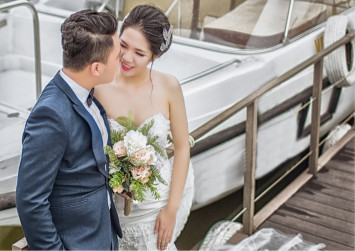 4. "I had a bride that openly spoke utter and complete sh*t about the groom's family, in front of his face. She would say that they were 'crazy, unclassy and annoying', and come the wedding, her family was actually the hardest family I ever had to deal with, and the groom's family was absolutely lovely. On top of all this, the bride yelled at the vendors all day, resulting in the videographers leaving after just 1 hour of shooting and the photographer crying in the bathroom. The groom and the bride's cousins apologised to me for her behaviour all night."

5. "We had one groom who was an hour late. His bride laid down on the floor, pulled the back of her dress over her head, and started singing nursery rhymes to herself until he could be located."

6. "The groom got mega plastered and smashed a bottle of cognac on the dance floor and literally tried to set in on fire. The function supervisor tried to tell him very politely that he couldn't and he got upset about that and started screaming 'This is my wedding and if I want to burn this place down I will.' Cops were called."

7. "I had a mother-in-law-zilla one time who, after seeing and approving of the chairs that we provided, caused a scene of epic proportions after she decided that the chairs weren't good enough anymore. The bride was sobbing by the end of it, being consoled by monster-in-law who simply kept telling her 'It'll be all right, even though everything is ruined by these GREEN chairs'."

8. "I had a bride, ready to walk down the aisle, I had not seen her dress prior to this. She asks me what I think of her custom-designed gown. I realise that it is completely sheer. I mean SHEER! To top it off, she was as nude as the day she was born. Yikes! What do you say to that?!"

9. "I am not a wedding planner (sorry!). However, my sister made her wedding a living hell for me. She is overweight and short, and so were some of her friends. I am not someone who dresses provocatively and I have no judgements about her weight. However, I am a size 0-2 and she forced me to wear a size 6 strapless bridesmaid dress and pay extra to have it shortened because I am tall and I wasn't allowed to wear heels (every other bridesmaid wore the same shoes except for me). I was already annoyed and spent the entire night trying to keep my dress from literally sliding to my ankles."

10. "Bride poured a gravy boat full of A1 (don't ask) all over a guest who wore a white pantsuit to the wedding but that one was sort of funny and the pantsuit lady sort of deserved it."

11. "The mother-of-the-bride was taking bets at the reception on how long it'd last."