What we learnt about Naomi Osaka from her Netflix series

Naomi Osaka is hurting. The world’s No. 2 tennis player with four Grand Slam titles under her belt, Japanese-born Osaka was a medal shoo-in for the Tokyo Olympics. She didn’t just lose a match on home soil; she’d lost a dream to “break or make history”.

But defeat, while uncommon, is not new to Osaka. Naomi Osaka, the docuseries now showing on Netflix, takes us back to her losses to Belinda Bencic (US Open 2019) and Coco Gauff (Australian Open 2020). Both instances let us in on the pressures this 23-year-old constantly deals with.

“I felt like so much pressure and stuff. I just felt like I was very lost cause I was just so focused on winning…I need to mentally take a break and chill out,” Osaka reminds herself repeatedly in the three-episode documentary.

She knows what she has to do – “I should think of the future instead of being stuck in the present” – but she’s trying to feel her way around amid expectations and aspirations. “For so long I’ve tied winning to my worth as a person… so what am I if I’m not a good tennis player?”

But as Naomi Osaka shows, nothing gets this talented athlete down for long. She desperately wants to win simply because she is so sensitive to the people around her and our world. As Black Lives Matter proved, she wants to become the platform to provoke others into thinking, talking and taking action.

Eventually, what makes Osaka so powerful both as a woman and an athlete is her passion for the game. “Tennis is not necessary for anything. I’m doing it, I love doing it,” she says.

Find out what we learnt about her in Naomi Osaka (no spoilers, we promise!).

She doesn’t enjoy being alone at home.

“So the last two nights that I slept here, I didn’t really sleep because, I kept saying it was jet lag but actually I was just really scared. Like, every noise freaked me out. So I ended up just staying on my phone. I felt it was like it was someone else’s house.”

So Osaka sleeps with a Pikachu plush toy, which steals a few moments in the docuseries. Osaka bought her 4,129-sqft Beverly Hills home, which comes with three bedrooms, four bathrooms and an infinity pool with spa, in 2019.

She wants to be successful to make her mother happy.

“When I was playing those local tournaments, all I remember was I wanted my mom to be happy. I want her to stop working. She would work overtime. She would sleep in her car sometimes. For me, that was the whole point of playing tennis.”

Her mother Tamaki Osaka and her father Leonard Francois met in Japan and kept their romance a secret from her family, and remained estranged from them for more than a decade.

“Did you think, by the time I was 22, I’d have done more? Or do you think this is acceptable?” Osaka asks her mother during her 22nd birthday celebration. Tamaki quietly states: “More than acceptable…You are growing up nicely.”

“Ever since I was a kid I was sketching stuff and trying to put different clothes together. As athletes, we don’t really get to dress up as much… it’s really fun.” Osaka partnered Japanese fashion label ADEAM and attended its runway presentation in New York.

The pieces stand out for their modern feminine aesthetic, with a clever fusion of architectural shapes and origami-like draping. Available here.

“I should probably try to speak Japanese more. I speak Japanese to my mom and sister. They won’t say anything about the way I talk because I have broken grammar,” she concedes in Naomi Osaka.

Although Osaka was born in her namesake city, she moved to the US at the age of three, where she picked up tennis and trained under her dad. Osaka gave up her US citizenship so she could represent Japan at the Tokyo Olympics.

She knows there’s more to life than playing – and winning at – tennis.

“I think about what would happen if the world stopped. What would happen if tennis stopped?” This, coupled with Osaka’s being half-Japanese and half-Black, meant Black Lives Matter resonated with her. “I always had this pressure to maintain a squeaky image and not get into any controversy.

''As long as I do that, everything’s chill. It’s weird because there’s a build-up of things I want to say, but I’m super scared… but this is what I’m supposed to be doing at this moment.” 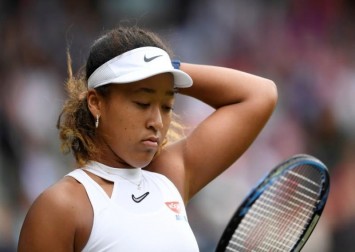 So she used her 2020 US Open triumph as a platform to show support for the movement – with 7 masks each bearing the name of those killed during the protests. “I feel like the platform I have right now is something I used to take for granted; I feel like I should be using it for something,” Osaka responds post-match.

She doesn’t want to be known just as a great player; she wants to be a great woman. Indeed, her courage to confront social issues from toxic masculinity to mental health has paved the way for athletes such as gymnast Simone Biles to prioritise personal well-being over the winners’ podium.

As Osaka states right from the opening of the docuseries: “Everyone’s built differently so we all have our different strengths… I’m more an aggressive baseliner… someone who dictates how the game goes.”