The Scots have their single malt ; Americans have their bourbon. As far as whisk(e)y styles go, this sweet corn-based spirit may live somewhat in the shadow of its Scotch cousin, but it’s got a rich history from settlers’ hooch to official American spirit.

There’re many myths and question marks surrounding this low-profile whiskey (if the sheer number of ‘bourbon vs whiskey ‘ searches is anything to go by).

To fill in those blanks, we’ve pulled together a cheat sheet on everything you need to know about bourbon, including the most important – where to drink it in Singapore.

Kentucky is the spiritual home of bourbon, particularly the county which lent its name to the spirit: Old Bourbon. Contrary to popular belief, though, bourbon isn’t strictly a made-in-Kentucky affair – it can be considered bourbon as long as it’s made in America.

Bourbon’s story begins with settlers in 19th-century colonial America. Thirsty and armed with knowledge of distilling spirits like rye whiskey, farmers in Kentucky turned their sights on the region’s most abundant grain: corn.

‘Bourbon County Whiskey’, in particular, became known for its distinctive corn sweetness; in 1840, a distiller named Jacob Spears was allegedly the first to dub his spirit ‘Bourbon Whiskey’. 95 per cent of the world’s bourbon today still comes from Kentucky.

What makes it bourbon?

First off, bourbon is all about corn. To be labelled bourbon, the mash bill – aka the mix of grains to be brewed – must be composed of at least 51 per cent corn. The remaining grains are open to imagination, but they generally involve some mix of rye, wheat, and barley.

While rye is historically the most common, wheat has come into its own with distilleries like the now-defunct Stitzer-Weller and Maker’s Mark flying the flag high for wheated bourbon. Today’s distillers are getting more creative with grains like oat, amaranth, and sorghum.

Given bourbon’s formal recognition as a ‘distinctive product’ of the US in 1964, it’s no surprise that it’s got a few regulations to unpack. By law, bourbon must be distilled to no more than 160 proof, barreled at no more than 125 proof, and finally bottled at a minimum of 40 per cent ABV. It also has to be aged in new charred oak barrels, though not necessarily American oak – French oak is a popular cask choice as well.

There’re a couple more bourbon laws dealing with purity and quality – hangovers from the ol’ days when distillers threw in any flavour shortcut from iodine to tobacco. Spirits termed ‘straight bourbon’ must be aged for at least two years; bourbon aged below four years is legally required to have an age statement on the bottle.

The 1897 Bottled in Bond Act dictates that bourbon endorsed as ‘bottled-in-bond’ – which isn’t too many these days – must be the product of only one distillery and distilling season, and aged in a federally bonded warehouse for four years.

A couple more common terms you’ll find on your bottle: ‘single barrel’ and ‘small batch’. Like single cask whisky, single barrel bourbons are prized expressions bottled from just one barrel, rather than being blended.

Small batch bourbon is a little fuzzier – it denotes the blending of a select number of barrels to create a consistent profile. This number, though, can vary wildly from, say, five barrels for craft distilleries to fifty for the big boys.

The dominant influence of corn makes bourbon the sweeter, smoother cousin to Scotch and rye whiskey. The secondary grains change the flavour profile too. High-rye bourbon tends to be bold and lively, with plenty of spice and fruit flavours to shout about – leading brands include Jim Beam and Four Roses.

Wheated bourbon, on the other hand, opens soft, sweet, and with a touch more graininess; well-known wheaters include Maker’s Mark, Old Fitzgerald, and the iconic Pappy Van Winkle. 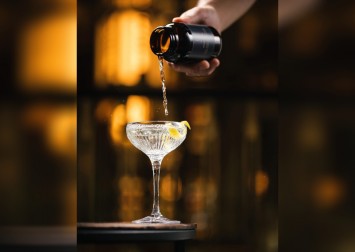 Different distillers can choose to give their barrels a lighter or deeper char, and the years that bourbon spends in charred oak give it its mellow notes of vanilla, brown sugar, and caramel – along with a delicious smokiness. Since new oak is the rule, these oak flavours often shine more powerfully in bourbon as compared to, say Scotch, which is almost always aged in used barrels.

A sour mash simply refers to the typical brewing process, which adds some mash from a previous batch to a fresh batch for fermentation (loosely akin to a sourdough starter). This acidic mash controls unwanted bacterial growth efficiently, while keeping flavours consistent between batches.

The sweet mash method, meanwhile, relies on entirely fresh yeast for each batch. While lesser-used, this method has its champions, who suggest that a more neutral-pH mash produces cleaner, sharper flavours.

Since Kentucky is the birthplace of bourbon, it’s a dream marriage with Southern comfort food. Honeyed bourbon and buttermilk fried chicken?

Yes please, and feel free to toss a dash of bourbon into the marinade while you’re at it. The smokiness of bourbon – especially spicier, high-rye numbers – kicks up the richness of fatty meats like ham and bacon too.

ALSO READ: The no-alcohol spirits that let you drink without gaining weight

Sweet tooths can turn to younger, sweeter wheated bourbon for dessert pairings. There’s nothing like a classic maple pecan pie to bring out bourbon’s toffee and vanilla flavours – or anything with maple syrup, really.

Nuttier bourbons play well with earthy staples like sweet potato pie, while a spirit with citrusy notes can perk up an apple cobbler or subtly lift dark chocolate treats.

Where to drink bourbon in Singapore

Unlike most Scotch-heavy whisky stores in Singapore, Original Whiskeys is dedicated to whiskeys with an ‘e’ – largely Irish, but with a stellar stash of American rye whiskeys and bourbons too. You can get your hands on flagships from long-running legends like Old Forester and Buffalo Trace, along with single-barrel bourbons from Michter’s and Blanton’s.

For a bit of a splurge, snag the award-winning Colonel E.H. Taylor Single Barrel Bourbon ($238) – this sipping number draws on age-old techniques by its namesake bourbon pioneer for a buttery, tobacco-laced bomb.

Century Wines might be better known for their sprawling cellars, but their bourbon collection is worth exploring too. There’re bottlings from Knob Creek, a Jim Beam label capturing the big, bold flavours of pre-Prohibition bourbons; there’s the legendary Heaven’s Door Straight Bourbon ($199) co-created by Bob Dylan,  produced in a Tennessee church-turned-distillery and packed with spicy, nutty warmth.

You’ll certainly want to pick up the Wild Turkey Rare Breed Bourbon ($132) too – this cask-strength number is creamy, chocolate-rich, and goes down smooth as silk despite its 58.4 per cent ABV.

There’s no mentioning Southern grub in Singapore without a nod to The Beast. This Southern kitchen and bourbon bar serves up hearty country staples from cornbread to Cajun pork, paired with an extensive list of bourbons by the glass.

Tear into juicy hunks of 24-hour brined Southern Fried Chicken ($20), washed down with a peppery, high-rye glass of Wild Turkey 101 ($15). If you’re just new to bourbon, the Introductory Flight ($32) is perfect for a taste across three major types of bourbon: wheated Maker’s Mark, low-rye Jim Beam, and high-rye Knob Creek.

Up to splashing out on some premium bourbons? The Whisky Shop is the goldmine. Their bourbon curation focuses on rare, limited-edition, and antique bourbon that might have first retailed for just a couple hundred dollars – but whose value now soars well into the thousands.

In particular, you’ll find coveted bottlings from Buffalo Trace’s Antique Collection series. Look out for the George T. Stagg 2002 Bot.2017 ($2,100) – a cherry-rich powerhouse aged for 15 years and bottled at a whopping 64.6 per cent ABV – and the Eagle Rare 17 Years Old ($3,500), a well-aged rarity given that bourbons are typically aged no more than 15 years.

PHOTO: An introduction to cognac: The French grape brandy beloved of kings and rappers