'Why we so suay': Former colleagues turned best friends open lok lok and hotpot stall - one day before Phase 2(HA)

Just a day before the opening of their new lok lok stall in Geylang, Eileen Kyain Kyu and Ooi Chin Sze received distressing news which sent their emotions into a tailspin.

The government had just announced the commencement of Phase 2 (Heightened Alert) two days later, on May 16. The measures, which we're currently still in, would limit the number of patrons at all dining establishments islandwide.

May 15 just so happened to be the highly-anticipated opening of the food business they'd been working hard on for the past several months. The former colleagues turned best friends and current business partners were left dumbfounded by the news, said Eileen, who appears to be the spokesperson for the pair.

"We were busy preparing for the stall's opening when we heard the news and we lost our excitement immediately.

"We were just in disbelief and wondered why we were so 'suay'", lamented Eileen, 39, who's Burmese-Chinese and conversed with us in fluent Mandarin.

But with everything ready and the stall's rent paid up for the month, they chose to go ahead with the opening.

Thanks to the support of friends who turned up on their opening day and the heightened measures not yet in force, business was brisk. However, things took a turn the next day as Singaporeans once again adjusted to the new normal of tightened pandemic restrictions.

The drop in business was understandable, as lok lok is a dish best served, well, hot — usually either freshly fried or boiled. And while their menu is available on delivery platforms, it hasn't helped their business much, shared Chin Sze, who's Malaysian.

The stall, which opens from 3pm to midnight daily, currently brings in barely $100 on most days, which Eileen shared is just enough to cover their costs including rent, but not enough to pay them a salary. For the past month and a half, they've also not taken any time off, and hiring additional staff is a financial impossibility.

Despite their large age gap, the partners became good friends and share a sisterly bond, said Eileen, who met the 26-year-old Chin Sze four years ago while they were working at a gift shop near Mustafa Centre.

After Eileen was retrenched in October last year due to the pandemic, Chin Sze, who's been working in Singapore for more than six years, decided to quit her job as well to dive into the food business. Each of them ploughed about $5,000 of their savings into the venture.

They got the stall up and running within four months, after securing an empty stall in a corner kopitiam in Geylang which they noticed had been left vacant for a while. Their hardware supplies which Eileen's husband ordered from China e-commerce platform Taobao took more than a month to arrive.

In the lead-up to their opening, the pair fervently tested their recipes and offered their food to friends here, in order to get their feedback. "Everyone said it was good, so it gave us the confidence to open our stall," shared Eileen, who's an avid home cook.

We asked Eileen if being the older of the two means that she calls the shots in the business?

Not necessarily, she replied. "So far we haven't had any huge fights, but it's all about give and take as well as communication.

"Of course, there's always the fear that being in business together would ruin the friendship," she added, but she adopts a 'live and let live' attitude.

"On some things such as marination of meats where I am more particular, I will handle it, but she is free to voice her opinion on how things should be run at the shop and I'm okay to let her do it," she reasoned.

Why lok lok and hotpot?

Eileen discovered her passion for cooking while working at their former workplace, where she was encouraged by the enthusiastic response whenever she made lunch for her colleagues.

After being in Singapore for 15 years, Eileen shared that her taste buds have adjusted to the Singaporean palate, and she loves to whip up local dishes such as curry chicken, claypot rice and bak kut teh.

While her colleagues had suggested she set up an economic rice stall, Eileen found the idea "too complicated and tiring".

Observing how the popularity of lok lok had taken off in the last few months with stalls mushrooming across the island, Eileen thought it was a bandwagon they could jump on.

It helped that the pair are fans of lok lok as well, and it is a familiar street food for Kedah-born Chin Sze.

With their eye set on the business, the both of them ate their way across the island, visiting as many lok lok stalls as they could in order to research what other stalls were offering. "Based on the sauces that we tried," said Eileen, "I thought we could do better". The pair spent months experimenting on the condiments to find the right flavours "that were different from the others out there".

Noting that Singaporeans love hotpot as well, they came up with the idea of combining the Malaysian street favourite with Chinese hotpot, where customers can dunk their skewered food into the different flavoured soups for an additional $3 per pot.

"Lok lok has become so common here and it's so easy to do, anyone can do it. The key difference would be in the dips that are available.

"So we thought that in order to differentiate ourselves further, we could provide hotpot as well," said Eileen, noting that some customers who are health-conscious might not enjoy eating fried food.

The pair have also split the work according to their strengths. Chin Sze works on the sambal belacan and peanut sauce that are familiar to both Malaysians and Singaporeans, while Eileen handles the Vietnamese sweet chilli sauce, Thai seafood sauce and also their specialty chilli sauce. Customers are welcome to take as many different sauces as they like to accompany their meal.

But an additional challenge has been put in Eileen's way — she found out just last month that she's expecting.

With a baby on the way, Eileen shared that she's been feeling more tired than usual and has had to rely on her husband, Alan, who works as a leasing executive, to help out at the stall after work.

She is thankful that Alan, who's eight years her junior, is supportive not just towards her new venture but also takes good care of her, catering to her every whim.

The pair met while they were both working at a food court. Then newly divorced from her Singaporean ex-husband, with whom she has a 12-year-old son, Eileen was incredulous that this "young boy" would be interested in her.

"I didn't believe him when he expressed interest and said 'boy, I can't afford to play with you'," said Eileen, laughing at the memory. "I told him there are so many young girls out there, why do you want to find a divorced auntie?"

But he persevered and the couple got married close to two years ago. "He's made all my dreams come true and I couldn't have found a better man," said Eileen of her doting husband who "would skimp on himself in order to provide me with whatever I wanted".

Her husband was also responsible for designing all the signages at the stall and engaged a friend to create a promotional video for their business.

But the food and beverage business is a notorious money pit and there's still a limit to the depths of their pockets.

"Chin Sze and I are giving ourselves three to six months for the business to turn around. If it doesn't improve, we may consider giving up the business and finding a job," said Eileen, who has to help support her elderly parents in Myanmar as well as her late younger brother's four young children.

But Eileen knows that she faces tough competition in the lok lok arena. "There are already three stalls in Geylang" and "even hawker centres have lok lok now".

She shared that the biggest challenge currently is ensuring that their food remains up to standard.

"If your ingredients are not fresh, your customers won't come back again," said Eileen, who maintains that even when business is bad, they will not hesitate to throw away any leftover food if they have to.

When it comes to lok lok, I must confess I've only eaten it a handful of times across the Causeway and only once in Singapore many moons ago (those in the East may remember one lok lok eatery located in Siglap).

I liked that the skewers weren't over-marinated and one could still taste the natural flavours of the ingredients. Each stick was sprinkled with a dusting of what looked like chilli powder, similar to the Chinese barbecue skewers, or so I thought. However, Eileen told me that the special seasoning powder was concocted in-house to lend a savoury-spicy kick to each bite.

What I enjoyed in particular were the deep-fried enoki mushrooms wrapped in bacon (but really, who wouldn't?) and their fried taupok stuffed with a home-made fish paste. For the latter, I found that instead of having it just deep-fried, it benefitted from being soaked for a few seconds in the soup base.

I chose the mala flavour for the hotpot base and I liked that the soup was not punishingly spicy. It was still palatable enough to drink and tasted more like a mala tang (mala soup) — which is yet another food craze that has swept across Singapore.

Don't be fooled by the term "mini" used in the description of the hotpot. I was blown away by how large the bubbling pot of broth was — it's definitely sufficient for four to share and at an economical $3, too. Needless to say, cooking your ingredients in a spicy, savoury stock is certainly a tastier alternative to having them simply boiled to doneness.

Of the accompanying sauces, the belacan dip was thick and redolent of fermented shrimp, while the peanut sauce was chunky. But my favourite condiment would have to be the green specialty chilli, which has a garlicky, citrusy tang to it.

When it comes to the variety of items available, however, I would say the selection is pretty run-of-the mill. There's the standard frozen food items (think sausages, gyozas and other processed foods), fresh seafood, as well as marinated meat skewers. Choices were limited on the afternoon that I went, but probably because they had just opened for the day and were starting to prepare the food then.

Read Also
Against all odds: These 3 young mums sell lok lok while juggling full-time jobs to support their kids 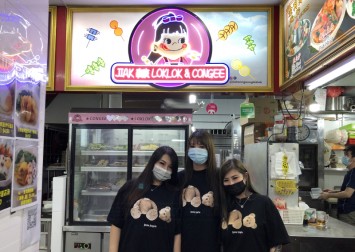 Vegetable skewers here go for 80 cents, with other sticks priced at $1. Customers can also choose to have rice or gan lao (dry) noodles on the side for $0.80 a bowl. And if you place an order between 3pm and 6pm, a choice of rice or noodles with any five sticks go for $5.

The main draw, in my opinion, would be in the choice of having hotpot to go with the typical lok lok meal at a reasonable price point. One thing to note, though, is that the kopitiam offers rather limited seating and one can imagine that post-Phase 2 (HA) it can reach full capacity really quickly.