80 per cent of Singaporeans live in HDB flats, and many of us grew up playing with the stray cats in the void deck and trying to imagine the lives of the people in the blocks opposite.

HDB living is part and parcel of life in Singapore and, for most young couples these days, the only remotely affordable way to become a home owner. But it does come with a bunch of trade-offs. Here are five things that aren't allowed in HDB flats.

Yes, you emptied your CPF to own your HDB flat, but under Section 27A of the Miscellaneous Offences (Public Order and Nuisance) Act, you technically cannot be naked in your "private" HDB flat when being exposed to public view.

So if you're a nudist, you better draw up the curtains before you take off your clothes. We're serious. A police officer has the right to enter your home to arrest you if you commit this offence. If caught, you may have to pay a fine not exceeding $2,000 or serve a jail term of not more than 3 months.

Your neighbour's annoying dog might wake you up every morning at sunrise with its incessant yapping, but hey, at least it's technically allowed to exist by the HDB. On the other hand, cats, which are mostly silent and infinitely less annoying, are not allowed in HDB flats. 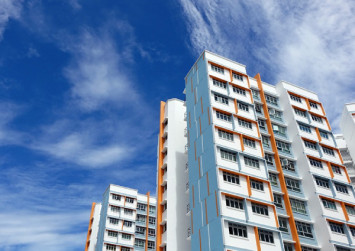 The authorities are afraid the felines will wander about indiscriminately or keep the neighbours awake. In practice, however, this regulation is often not enforced, unless your neighbours are really mean and complain to HDB about Whiskers or Hello Kitty. The maximum fine you can be slapped with is $4,000.

RUNNING A BUSINESS OF A CERTAIN SCALE

There's nothing stopping you from working from home or running a small business in your HDB flat. But when your business reaches a certain scale, you might be breaking the rules. That means you can be a private tutor who operates from home, but not run a tuition centre.

You can bake pineapple tarts for profit during Chinese New Year, but you can't convert your home into a full-fledged bakery. You can even get hired help to come in during the day, but not more than two.

RENTING OUT ANY PART OF YOUR FLAT TO TOURISTS ON AIRBNB

You might have been inspired by that recent news report about the average host on Airbnb making $5,000 a year, but seriously, don't try that stunt if you live in an HDB flat. In 2014, two HDB flat owners lost their flats for renting them out to short-term visitors and of course, thanks to the fact that their listings were on sites like Airbnb or Roomorama for all the world to see, they weren't that hard to track down. If you want to rent out rooms in your flat legally, you'll need to ensure your tenant is on a contract of at least 6 months.

Every night, your Tiger Mum neighbour forces her kid to practise the piano, and uh, let's just say he's got a long way to go before he becomes the next Lang Lang.

Lucky for you, according to the HDB, he needs to stop banging on the keys between 10:30pm to 7am. During this time, residents are reminded to keep noise levels low, and avoid noisy recreational activities.

SMOKING IN THE CORRIDOR

There's nothing like enjoying the view of the setting sun from the corridor outside your unit as you light up a cigarette, says the uncle next door when he goes out for his 7pm smoke break. Well, guess what, it's actually an offence to smoke in common areas in residential buildings including void decks, stairwells and common corridors-the same applies to condo dwellers.

That means you either smoke inside your flat itself, or go all the way downstairs and smoke at a distance from the block.

Older resale flats have very interesting layouts. Some may even have high ceilings. Home-proud Singaporeans have taken to add mezzanine floors into their HDB flat, making it look like a loft.

Sounds so dreamy, right? Wrong - it's actually illegal. You can be fined up to $5,000 for adding additional load on the structure of the flat, and then you gotta bear the cost of dismantling the mezzanine floor.

This is only one of the many things that are disallowed when renovating your HDB flat. So next time you've got a crazy idea for your home, check what's permitted by HDB before you go ahead!