The lift that Andrew was standing on gave way suddenly, and he fell along with it.

It was his first day of work, but tragically, it was also the last day his family saw the 18-year-old alive.

The Malaysian teenager, identified in reports as Andrew, fell to his death at the supermarket where he had just started work.

The video initially shows a lift in the open shaft moving downwards, causing several carton boxes at the lift landing to topple over onto the roof of the lift. Andrew and a colleague are seen deciding what to do next.

The clip then shows the teen walking over to stand on the roof of the lift to retrieve the boxes which had fallen.

From the video, at least 30 seconds go by without incident as the teen continued moving the boxes out from the roof of the lift and onto the landing area.

But it was when he appeared to carry the last box onto the platform that tragedy struck. The lift that Andrew was standing on gave way suddenly, and he fell along with it.

He was pronounced dead at the scene.

According to The Borneo Post, the zone chief of the Bintulu Fire and Rescue Department (Bomba) said the victim was extricated from the side of the lift and was likely to have been crushed by it. 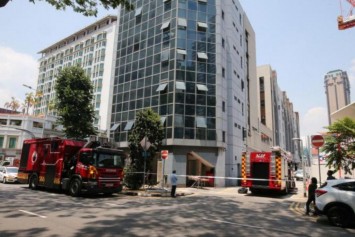 Sin Chew Daily reported that Andrew had just finished the Sijil Pelajaran Malaysia (SPM) exams, equivalent to the O-levels in Singapore, and was awaiting the results.

His grieving mother told the paper that Andrew had always been obedient and well-behaved. He had found a job of his own accord in order to help out the family's finances.

She added that Andrew also knew the course that he wanted to study in university, but sadly his dream will never be fulfilled.