While some parents let their kids sample their alcohol of choice, usually just to watch their faces scrunch up in disgust, a video went viral when a two-year-old is seen swigging a can of beer like water.

The video supposedly took place in Iskandar Puteri, Johor Bahru, as reported by Sinar Harian. It immediately gained the attention of netizens who quickly reported the incident to the police, worried that the boy was being abused.

They weren't the only ones to file a report. According to the head of Johor's Criminal Investigation Department, Senior Assistant Commissioner Yusof Ahmad, the child's own mother has also spoken up, claiming that her son had acted of his own accord. She also informed them that her son's behaviour was beyond her control, emphasising that she didn't deliberately let him drink the alcohol and that he took the can on his own.

However, in the video, the following exchange can be heard.

When one of them takes the can away from the child, the person behind the camera can be heard saying to give the can back to him. The second voice proceeds to call either the child or the father "paradesi", a Tamil slang that implies one is a good-for-nothing.

Apparently, it wasn't the child's first can for the day too, with the second voice pointing out that he had had one earlier in the morning. She also made a remark that the child would grow up to be just like his father in response to the person filming asking the child whether he was a serious drinker.

She is then seen handing the can back to the child, encouraging him to drink it up. Despite the commotion around him, the child can be seen downing the last of the alcohol before exclaiming happily. 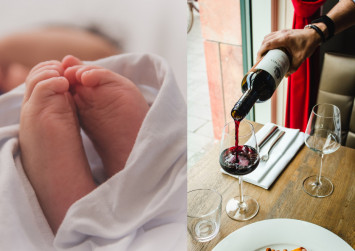 Alcohol is extremely dangerous for young children - recently an infant in Beijing died after his grandfather gave him a sip.

Due to the low blood sugar effect when the brain is deprived of glucose, a child might suffer from a seizure or fall into a coma. They also run a much higher risk of alcohol poisoning than adults due to their small size.

Fortunately, Senior Assistant Commissioner Yusof has reassured the public that the boy did not experience any health issues. The case, on the other hand, continues to be investigated.