A married couple was killed and their two young children injured following a head-on collision with a sports utility vehicle (SUV) near Tangkak in Johor at about 2.15pm on Friday (June 15).

The family was driving back to Singapore after visiting a relative in Rompin, Malaysia at the time of the accident.

Mr Chua Keh Loing, a 41-year-old Singapore permanent resident (PR) who was behind the wheel, had lost control of his car and entered an opposite lane with oncoming traffic, resulting in the collision.

Photos taken at the site show a badly-mangled car. The airbags had also been deployed.

After Tangkak Fire Station was alerted to the incident, an ambulance was dispatched to the scene. 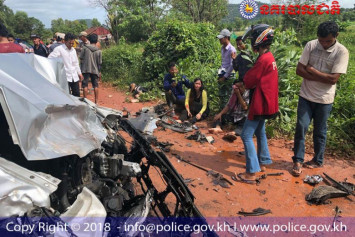 Their children — an eight-year-old son and a six-year-old daughter — were also injured, and are being treated at the same hospital.

The driver of the SUV and his three passengers also sustained injuries.

Mrs Chua’s sister told  Sin Chew Daily News that her family has not informed the children about their parents’ death, worried that they would not be able to take the blow.

She also said that they have been asking for their parents.

According to Lianhe Wanbao, Mr Chua worked as a clerk in Singapore and the family lived in Woodlands.

Some neighbours also told reporters that the Chuas visited Malaysia thrice a year and would usually take the train.

A neighbour, 59-year-old Ms Lin, said that it could be the first time that the family had driven to their relative’s house.

She added that the car Mr Chua drove belonged to his brother-in-law.

The couple’s wake will be held in Seremban, reported The Straits Times.