Not only are military-built hospitals being deployed, "field ICUs" are set to be rolled out in Penang.

KUALA LUMPUR - Unorthodox measures are being rolled out as Malaysia's healthcare system is stretched thin, not just by the rising number of Covid-19 cases, but also from the severity of the infections, with more critically ill patients in intensive care units (ICUs).

Not only are military-built hospitals being deployed, "field ICUs" are set to be rolled out in Penang, where critical care capacity has breached 100 per cent, while the surge in deaths has forced Sungai Buloh Hospital, the Klang Valley's main coronavirus treatment facility, to use a shipping container as a makeshift morgue.

The Malaysian authorities have constantly opened up new Covid-19 ICU wards during this year's coronavirus outbreak which saw record highs of new and active cases in January and February respectively, while both the number of victims in ICU and mortalities peaked last week.

ICU utilisation is currently at nearly 90 per cent of the 850 beds available, despite a nationwide movement control order (MCO) imposed last Wednesday (May 12).

"If we are unable to curb the spread, then a full MCO can be considered," Health Minister Adham Baba said on Monday (May 17) about Selangor, which is facing the worst outbreak in the current wave, regularly accounting for about a third of the country's new infections.

The current MCO still allows a wide swathe of the economy and non-contact exercising to proceed, whereas last year's version had barred all non-essential activity.

The Health Ministry has had to postpone elective surgery while semi-emergency cases have had to be transferred out from Covid-19 hospitals while the ministry tries to add up to 1,000 new beds for confirmed and suspected coronavirus cases, including at teaching hospitals. 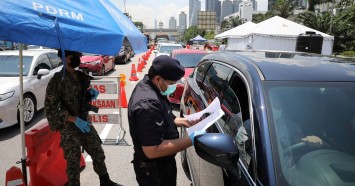 Other Covid-19 patients needing medical care have also increased, with dreaded variants of the virus identified in South Africa, India and the United Kingdom being detected.

Datuk Seri Adham revealed last week that half of all new patients in the past month had symptoms, though just 27 per cent did in March.

This has forced even low-risk quarantine and treatment centres (PKRC) to open up more beds for symptomatic patients, including placing double-decker beds in open-air parking lots, which have resulted in complaints over conditions at these centres.

Mr Syed Mohamed Arif Abdul Rahim alleged on Sunday that when he checked into the Malaysia Agro Exposition Park Serdang PKRC in Selangor, he was assigned to a bed that already had an occupant, and was instead asked to "just find an empty bed", and ended up spending the night without a pillow or blanket.

"There's just a bidet to be used nearby the toilet bowl. Voila! This is the shower guys! All in all, someone could develop mental health problems here," he said on Twitter.

There’s just a bidet to be used nearby the toilet bowl. Voila! This is the shower guys! 🙌🏻

All in all, someone could develop mental health problems here.

Not only because of the toilet but of the environment. pic.twitter.com/isYbDZF9e7

The state health department responded by saying the situation at that PKRC "is increasingly challenging with the surge of category 3 patients", referring to those with pneumonia.

The number of beds for category 3 patients there had to be increased to 757 from just 60 in January, and there are plans to add 1,000 more.

The use of auxiliary "outdoor" set-ups is also being required for more serious cases.

Director-General of Health Noor Hisham Abdullah visited the Tuanku Mizan Armed Forces Hospital on Sunday to observe a dry run of field ICUs which will be constructed at the compound of the Kepala Batas Hospital, Penang, on Tuesday. The 27 units are expected to be operational by the weekend.

"ICU patient admission in Penang has increased by more than 45 per cent over the past two weeks and this upward trend is expected to continue, especially when there are new clusters involving nursing homes and so forth," he said.

Our clinicians voiced their feeling of helplessness and frustration, struggling to secure ICU beds for their patients...

Meanwhile, the bodies have been piling up at Sungai Buloh Hospital with 14 Covid-19 deaths recorded over the weekend alone. The Heath Ministry shared grim images of a container being prepared as a temporary morgue even as Tan Sri Noor Hisham added that "recently deaths outside hospitals and 'brought in dead' in the Klang Valley keep increasing".

Posted by KEMENTERIAN KESIHATAN MALAYSIA on Sunday, May 16, 2021

Malaysia reported another 4,446 infections and a new record of 45 deaths on Monday, bringing the totals to 474,556 and 1,947 respectively since the pandemic began.