For 30 minutes, a Malaysian woman returning from Singapore was allowed to meet her terminally ill father during her mandatory 14-day quarantine.

But there was one condition — she had to wear personal protective equipment (PPE) throughout the reunion.

Although her father barely had any energy to speak, he perked up for a family photo with her. Before she left, her father reassured her that he was alright and that they'd see each other again soon.

He died on June 3, hours before she completed her quarantine. 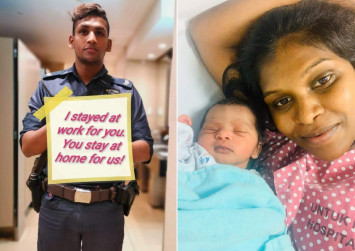 "Seeing him put on a brave front for us despite being so tired, it made us feel very upset," the bereaved woman shared with Sin Chew Daily in an interview.

Her 61-year-old father was diagnosed with terminal cancer three weeks ago, she said. He had tried to keep his condition a secret from her, knowing that she was working in Singapore.

However, seeing his deteriorating condition, their family members informed his daughter.

For the young woman, travelling home to Perak, Malaysia, from Singapore during the Movement Control Order (MCO) meant a mandatory quarantine period of 14 days.

Worried that she might not be able to see her father for the last time, she continuously applied for permission to visit him.

According to the paper, the woman was initially quarantined in a facility south of Perak, before she was allowed to be shifted to another quarantine centre in Ipoh, closer to home.

On the ninth day of her quarantine, she was finally granted permission to see her ailing father and was escorted home by medical staff.

The reunion hadn't come by easily for the family, as the woman and her three siblings were all separated due to the MCO. The photo taken during her visit turned out to be the last family photo for them.

"Quarantine was troublesome and tiring, but being able to see my father one last time was the most important thing for me," she shared.

"Even though I had to wear heavy and stuffy PPE from 11 am to 6 pm, to be able to see my father again, to have our family reunited again, it was worth it."