In a Facebook post on Thursday (Dec 13), he said: "I hope the countries can find a solution that is a win-win situation to prosper together and not get entangled in unnecessary issues."

He posted a photo of him flanked by two men - one from Singapore and another from Malaysia.

"On my right is Prem Singh from the Singapore Special Branch. He has been taking care of me for nine years. On my left is Leftenan Kolonel Samsyawal Muhamad from the Malaysian Special Forces (Gerak Khas), who was my sniper buddy when I did my Young Officer's course in PULADA (Malaysian army's combat training centre) in 2002. He has been working with me for the last three years," the 34-year-old heir to the Johor crown wrote. 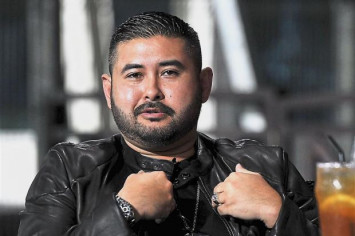 "Here I am in the middle between Singapore and Malaysia. The three of us are good friends, working well in the same organisation," he added.

Tensions between Singapore and Malaysia have ratcheted up over airspace and maritime borders.

Singapore has lodged a strong protest with Kuala Lumpur over its move to extend the Johor Baru port limits to encroach into the Republic's territorial waters off Tuas. Singapore officials said Malaysian government vessels have also made 14 incursions into Singapore's territorial waters between Nov 24 and Dec 5.

Singapore responded by extending its own port limits, which Malaysia protested against.

Malaysia has also objected to the new Seletar Airport landing procedures, which were scheduled to be enforced on Jan 3, and said it wanted to reclaim management of the airspace over southern Johor, where Singapore has been providing air traffic services since 1974.

On Thursday, Singapore took steps to ensure that no country can unilaterally initiate third-party arbitration or adjudication on maritime boundary disputes against the Republic.

Singapore informed Malaysia that it has filed a declaration under Article 298(1)(a) of the United Nations Convention on the Law of the Sea (Unclos), as it hopes to resolve such issues through talks.

Singapore and Malaysia have agreed to meet next month to resolve the dispute regarding Singapore's territorial waters off Tuas.