SYDNEY - Malaysia's veteran ex-leader Mahathir Mohamad said Friday (March 23) that missing flight MH370 might have been taken over remotely in a bid to foil a hijack, reviving one of the many conspiracy theories surrounding its disappearance.

The Malaysia Airlines plane disappeared in March 2014 with 239 people - mostly from China - on board while en route from Kuala Lumpur to Beijing.

No sign of the Boeing 777 jet was found in a vast search of the southern Indian Ocean and the Australian-led hunt, the largest in aviation history, was suspended early last year.

Only three confirmed fragments of MH370 have been found, all of them on western Indian Ocean shores, including a two-metre wing part known as a flaperon.

The search restarted in January, in an area north of the original zone that scientists now believe is the likeliest crash site. A private research vessel is scouring the seabed, commissioned by Malaysia on a "no find, no fee" basis.

Mahathir, 92, who is leading an opposition bid to topple scandal-tainted Malaysian Prime Minister Najib Razak in elections due this year, said he did not believe Kuala Lumpur was involved in any cover-up.

But he told The Australian newspaper in an interview that it was possible the plane might have been taken over remotely.

"It was reported in 2006 that Boeing was given a licence to operate the takeover of a hijacked plane while it is flying so I wonder whether that's what happened or not," said Mahathir, who ruled for 22 years.

"It's very strange that a plane leaves no trace at all."The capacity to do that is there. The technology is there," he added of his theory.

"You know how good people are now with operating planes without pilots. Even fighter planes are to be without pilots. Some technology we can read in the press but many of military significance is not published." 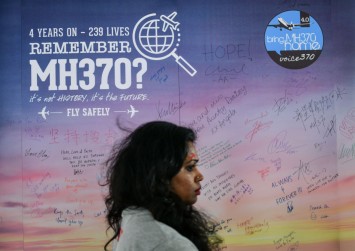 According to reports, Boeing in 2006 was awarded a US patent for a system that, once activated, could take control of a commercial aircraft away from the pilot or flight crew in the event of a hijacking.

But there is no evidence it has ever been used in airliners due to safety concerns.

The lack of a final resting place for MH370 has spawned numerous theories, including that it was a hijacking or terror plot.

The jet's captain Zaharie Ahmad Shah also came under scrutiny, although investigations on him have turned up nothing.

An initial search focused on an area east of peninsular Malaysia, but attention soon shifted west when it emerged the plane had switched course and headed over the Indian Ocean - just as its communications equipment was switched off.

Investigators later focused on an area to the west of Australia based on scant clues available from satellite "pings" and calculations of how much fuel was on board, which suggested the plane ditched in the southern Indian Ocean.