A truck driver watches over as an excavator loads his vehicle at a bauxite storage site in Bukit Goh situated in Malaysia's rural state of Pahang.

KUALA LUMPUR - Malaysia will next month lift a ban on bauxite mining that has been in place for three years, a minister said on Tuesday, despite warnings the move may cause serious environmental damage.

The mining of bauxite, the main ore used to smelt aluminium, took off in Malaysia to feed strong Chinese demand after neighbouring Indonesia banned exports in 2014.

But the authorities imposed a ban after complaints that pits across the bauxite-rich central state of Pahang were blighting the landscape, rivers were being stained red by mining run-off, and there was a rise in respiratory problems and skin rashes.

In addition, critics said most of the mining was illegal, and done amateurishly with no government oversight.

Read Also
33,000 litres of RON95 fuel go up in smoke after accident on Malaysian highway 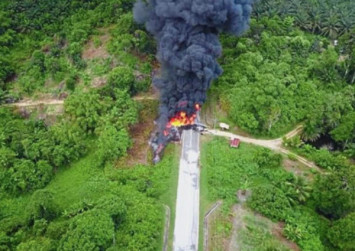 Xavier Jayakumar, Water, Land and Natural Resources Minister, said the new government which took power last year has decided not to extend a moratorium which ends on March 31.

"Industry players can resume mining by April, but they must adhere to strict mining conditions," he told AFP, adding the move was to allow Pahang to earn crucial extra revenue.

The announcement will also allow some 432,000 tonnes of high-grade bauxite, stored at Kuantan port on the South China Sea, to be shipped overseas.

Kuantan Member of Parliament Fuziah Salleh, representing a party in the ruling coalition, criticised the decision to lift the ban, warning that waste would once again be washed into waterways.

Mining will "pollute the rivers which are sources of water for the locals", she told AFP.

Bauxite mining can release carcinogenic heavy metals such as strontium, caesium and other harmful substances, as well as low levels of radiation.

It is not clear whether the policy shift will lead to a new boom in bauxite mining in Malaysia, however, particularly as Indonesia started allowing exports again in 2017.