KUALA LUMPUR - Malaysian authorities said Monday they have seized a record 1.2 tonnes of crystal methamphetamine that was shipped from Myanmar hidden in tea packets, the latest huge drugs haul in Southeast Asia.

Six people were arrested after the drugs were found during an operation by customs officers on May 22 at Port Klang on the outskirts of Kuala Lumpur.

The stash was worth 71 million ringgit (S$23.88 million) and had been shipped in a container from Yangon in Myanmar, said Customs director-general Subromaniam Tholasy.

It was the latest massive crystal meth seizure in Southeast Asia, as the notorious "Golden Triangle" - an ungovernable border zone that crosses Myanmar, Laos, Thailand and China - experiences a boom in production.

Subromaniam told reporters the crystal meth haul was the biggest ever in Malaysia in terms of value and weight.

"We believe the drugs were for the local market and it is the work of a local criminal syndicate working with a Myanmar criminal gang," he said. 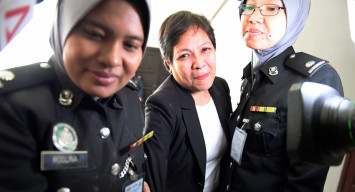 Three Malaysians and three Myanmar nationals aged between 22 and 48 years had been arrested, said the customs chief.

Under Malaysia's tough anti-narcotics laws, they could face the death penalty if found guilty of trafficking.

Myanmar in particular has become a major supplier of meth, with producers in its conflict-riddled northeast pumping out narcotics for Southeast Asia and beyond.