A Malaysian official who probed the 1MDB mega-scandal which helped topple the corruption-plagued former regime has been appointed as the new central bank governor, the government said Friday.

Nor Shamsiah Mohamad Yunus is returning to Bank Negara Malaysia to take up the top job almost two years after leaving her post as deputy governor, a spokesman for the prime minister told AFP.

Muhammad Ibrahim quit as bank chief this month after claims emerged that the institution helped Najib Razak's regime by purchasing government land in a bid to cover debts racked up by sovereign wealth fund 1MDB. The bank has insisted there was nothing untoward in the deal.

Najib, his family, and cronies were accused of stealing billions of dollars from 1MDB in a blockbuster fraud that spanned the globe, and the claims were a major reason for his coalition's shock loss at last month's election.

New Prime Minister Mahathir Mohamad has re-opened investigations into the scandal and there has been a purge of top officials linked to Najib, with the attorney-general and top judges among those leaving their posts. 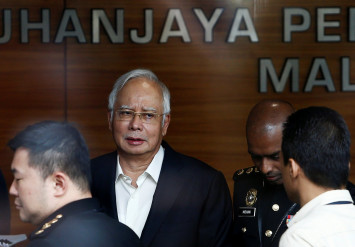 Najib and 1MDB have consistently denied any wrongdoing.

Shamsiah aided an investigation into 1MDB during her previous stint at the bank.

She left the institution in 2016 at the end of her term but without the fanfare typically accorded to such a senior official, raising questions about whether she got on the wrong side of Najib's government.

Najib shut down a series of domestic investigations into 1MDB while in power, and ejected critics from his administration.

Analysts said Shamsiah's short-term aim would be to restore some stability and confidence to the markets, which have fallen heavily recently as investors nervous at the country's new political direction have pulled funds.

However, Irvin Seah, an economist at DBS Group in Singapore, told Bloomberg News: "Shamsiah's not new to the industry so in terms of monetary policy, we're in good hands."