Mr Anwar, who was sworn in as prime minister last week, said ministers should begin their duties soon and he advised them to avoid wastages, bribery, and abuse of power.

"I have made it clear to the Cabinet that the unity government prioritises good governance and the need to reduce the people's burden, as well as focusing on stimulating the economy," he said.

For the first time in Malaysia's history, two deputy prime ministers were appointed — BN chairman Zahid, who is facing dozens of graft charges, and GPS's Fadillah Yusof, who was a former Works Minister.

"This is a big responsibility to be shouldered with determination, sincerity and honesty in the interests of political stability, the nation's economy and prosperity," Mr Fadillah, the first deputy prime minister from Sarawak or Sabah, said in a statement on Friday night. He will also helm the plantation and commodities ministry.

PH, which has the largest bloc of MPs, took the lion's share of appointments with 15 ministers, including in key portfolios such as finance, home affairs and education. 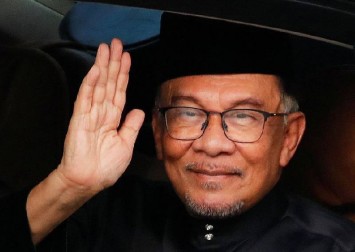 Meanwhile BN, which contributes 30 lawmakers was allotted six ministries including in defence, law and institutional reform and international trade and industry.

Umno deputy president Mohamad Hasan will be defence minister, while Ms Azalina Othman will be law minister. Tengku Zafrul Aziz, who was finance minister in the last administration and had lost his parliamentary seat contest in the Nov 19 general election, returns to the Cabinet as international trade minister.

This is a unity government. It has all people, Sabah & Sarawak represented. PM @anwaribrahim has given his best to negotiate this.

It’s also a compromised Cabinet, nobody is dominant.

Let’s give them the necessary support to rebuild Malaysia.#DemiPertiwi pic.twitter.com/Ri6d84kQ6R

The new ministers are set to attend a special meeting on Monday.

"The meeting will talk about the way the Cabinet members should manage their respective ministries, on how to work together with civil servants, how to make media announcements and how to not waste government funds," Datuk Seri Anwar said at an earlier event on Friday in Ipoh, Perak, according to the Malay Mail.

Mr Anwar last week said his Cabinet appointments should not be seen as a "reward" for politicians who backed him to lead the unity government.

He had also promised to reduce the size of his Cabinet compared with that of his predecessors Ismail Sabri Yaakob and Muhyiddin Yassin, who both had bloated Cabinets of more than 30 ministers and nearly 40 deputies.

The swearing in of the Cabinet ministers has been set for 3pm on Saturday.