Malaysia puts deportations to Myanmar on hold till after Asean meets

Malaysia came under international pressure after sending back the Myanmar nationals in February.

KUALA LUMPUR  - Malaysia decided on Wednesday (March 24) to postpone planned deportations to Myanmar until after a proposed emergency regional summit to discuss the crisis there brought on by a military coup, sources familiar with the matter told Reuters.

Right groups raised concerns over the safety of deportees when Malaysia sent back 1,086 Myanmar nationals on Myanmar navy ships last month, just weeks after the military had seized power in a Feb 1 coup.

Detained in Malaysia for immigration offences, they were deported despite a court order halting the plan.

Rights groups had told the court that children and asylum-seekers fleeing persecution in Myanmar were among those being deported.

Three Malaysian sources familiar with the matter said the decision to delay a plan to deport a second batch until after a proposed meeting of Asean to discuss the Myanmar crisis was taken at a Cabinet meeting on Wednesday.

The sources requested anonymity, as they were not authorised to speak to the media.

Myanmar this month had offered to send three more navy ships to pick up its people detained in Malaysia, one of the sources said.

Malaysia's Foreign Ministry directed queries to the Home Affairs Ministry and immigration department, neither of which responded to requests for comment.

Indonesia last week called on Brunei, the current chair of Asean, to convene an urgent meeting to discuss the situation in Myanmar amid a violent crackdown on anti-coup protesters. 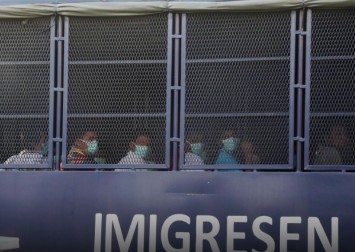 Malaysia backed Indonesia's call, but it is unclear whether, or when, that meeting would be held.

Malaysia came under international pressure after sending back the Myanmar nationals last month, with diplomats saying Kuala Lumpur was legitimising the coup by accepting the junta's proposal to take back the detainees.

Malaysia said the people deported last month were undocumented migrants and did not include ethnic Rohingya refugees or asylum-seekers.

But concerns have persisted as the UN refugee agency has been denied access to detainees for more than a year to verify their status.