KUALA LUMPUR - A search by a US firm for missing Malaysia Airlines flight MH370 is expected to complete its survey by mid-June, the Southeast Asian nation said on Saturday, as families marked the fourth anniversary of one of aviation's greatest mysteries.

Australia, China and Malaysia ended an unsuccessful A$200-million ($159.38 million) search across a 120,000 square-kilometer area in the Indian Ocean in January 2017, despite investigators urging authorities to extend the operation 25,000 sq km north of the search area.

Earlier this year, Malaysia agreed to pay US firm Ocean Infinity up to $70 million if it found the plane within 90 days. The search vessel, the Seabed Constructor, began its search on Jan. 23.

The 90-day agreement, however, did not include days for the search vessel to travel to a port for refueling, Civil Aviation Authority chairman Azharuddin Abdul Rahman said.

"The vessel has a working cycle of 26 days before it needs to refuel and resupply," Azharuddin said at a memorial event marking the fourth year of the plane's disappearance.

Plans to recover the Boeing 777's wreckage or its flight recorders, in the event the aircraft is found, will be finalised in two weeks, and will involve several Malaysian and Australian agencies, he said.

Malaysia will take custody of any parts recovered from the seabed, he said. 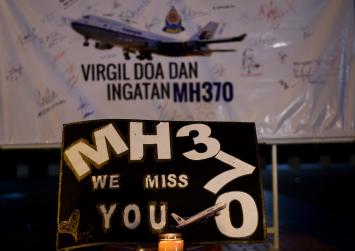 The Seabed Constructor has completed the first part of its search, covering 8,200 sq km, and has now moved into a new area, Ocean Infinity said in its weekly update on Tuesday.

It has not yet made any significant findings, the firm said.

Saturday's memorial event featured talks and musical performances, as families paid tributes to the passengers and crew aboard the aircraft.

"We want to remind everyone that MH370 is not history, it's the future," said Grace Nathan, a lawyer whose mother, Anne Daisy, was on the plane.

"It's very important in the interests of aviation safety that we find MH370, so that we can prevent something like this from happening again," she said.

Investigators are divided on whether the aircraft suffered a mechanical failure or whether it was deliberately diverted over the southern Indian Ocean.

Debris has been collected from Indian Ocean islands and Africa's east coast and at least three pieces have been confirmed as coming from the missing plane.