KUALA LUMPUR - Malaysia's anti-graft commission has called for a statement from the wife of former Prime Minister Najib Razak in its investigation into a former unit of state fund 1Malaysia Development Berhad (1MDB), two sources at the commission said.

Rosmah Mansor will have to go to the headquarters of the Malaysian Anti-Corruption Commission (MACC) on Tuesday to have her statement recorded in connection with investigations into SRC International, one source said.

"The notice was served by MACC officers at the home of the former prime minister today," the source said on Friday.

The sources asked not to be identified as details of the notice have yet to be made public.

Najib, defeated in a stunning election loss last month by his mentor-turned-rival, Mahathir Mohamad, has become the subject of a money-laundering probe. He and Rosmah have been barred from leaving the country. 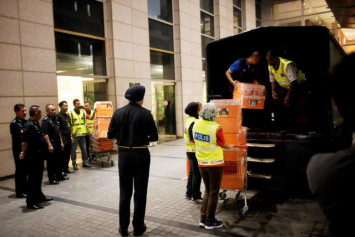 Najib made a statement to the agency last month about a suspicious transfer of $10.6 million to his bank account.

The sum, however, is just a fraction of billions of dollars allegedly siphoned from state fund 1MDB, a scandal that dogged the last three years of Najib's near-decade-long rule and a key reason why he was voted out in the May 9 election.

Attention has focused on Rosmah after police discovered hundreds of luxury handbags and a stash of jewelry and cash during raids on apartments linked to Najib and his family. 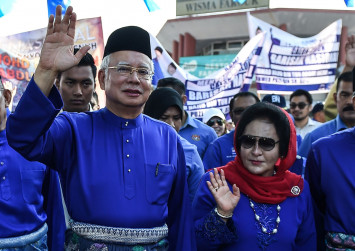 Malaysian police have said cash of 114 million ringgit (S$38.3 million) and more than 400 handbags were seized. Experts were being brought in to value the jewelry, watches and other seized items.

The state fund, 1 Malaysia Development Berhad, is the subject of money-laundering probes in at least six countries including the United States, Switzerland and Singapore.

The US Justice Department is seeking to recover more than $1.7 billion in assets traceable to funds allegedly misappropriated from 1MDB.

Lawsuits filed in the United States allege more than $4.5 billion was diverted from 1MDB and laundered through a web of shell companies and bank accounts.