KUALA LUMPUR - A controversy has broken out in Malaysia over postage stamps bearing a famous local church, as part of the tussle between Pakatan Harapan (PH) and Malay groups opposed to it.

Malay rights group ISMA, or Malaysia Muslim Solidarity group, said the issuing of a new stamp bearing a Christian symbol was "another example of Muslims being bullied" since PH won power in May 2018.

ISMA president Aminuddin Yahaya on Facebook: "So, if outsiders label Malaysia as a Christian nation, we should not be angered because we have been portrayed as such."

But the post office, Pos Malaysia, said postage stamps showing prominent places of worship in Malaysia - a mosque, Hindu and Buddhist temples, a Sikh gurdwara and a church - were first issued in November 2016, before PH came to power. 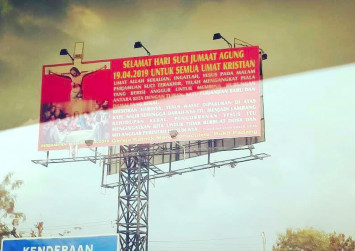 The new series of five stamps was issued on May 11, and is the second in the series.

Each stamp features a landmark building of one of the five main religions in Malaysia, including the St George church in Penang that was picked out by the ISMA chief.

Civil rights lawyer Syahredzan Johan wrote on Twitter: "According to Aminuddin Yahaya, the president of ISMA, Islam is being bullied because now there is a stamp with a church. But in 2016 (Malaysia) was under Barisan Nasional. So ISMA kept quiet then.

The tussle is part of a wider fight between Malay and Muslim groups which back Umno-led BN and Parti Islam SeMalaysia, and which are trying to weaken PH's image among Malay voters.

These groups are pushing the narrative that Malaysia's majority race, the Malay Muslims who form some 60 per cent of the 32 million population is being sidelined and "bullied" since PH came to power.

On the other hand, according to this political narrative, too much support is given to the minorities, comprising non-Muslim Chinese, Indians and other races.

Mr Aminuddin has since deleted his posting.

Malaysia's defacto Islamic affairs minister Mujahid Yusof Rawa urged the Muslim community to stand up against the "corrupt narratives" of certain groups or individuals as such thinking does not promote Islam.

"The whole Muslim society must stand up against these thoughts which will lead Muslims and Malays into backwardness," Mr Mujahid said in Penang on Friday evening, as quoted by Malaysiakini news site.

The push by these groups against PH started when the government appointed non-Muslims as the chief justice, attorney-general and de facto law minister soon after it came to power, raising concerns that the move would weaken Malay and Muslim rights.

After chief justice Richard Malanjum retired, he was replaced this month with a Muslim, Tengku Maimun Tuan Mat, the first woman chief justice. But the appointment was largely ignored by these critics.

The PH government also spent RM26 billion (S$8.6 billion) to bail out two institutions close to the hearts of the Malays, pilgrimage fund Tabung Haji and land development authority Felda. But again, these efforts were largely ignored by the critics.