The South-east Asian country has reported a steady climb in cases after an increase in travellers to Sabah, on Borneo island, ahead of its state polls last Saturday.

On Thursday, Malaysia recorded 260 new infections, the highest since its June 4 peak of 277.

Prime Minister Muhyiddin Yassin's government has drawn criticism for failing to impose controls such as mandatory screening for travellers from Sabah prior to the election, and for allowing people to cut short a 14-day home quarantine order if they tested negative for the virus.

Mr Muhyiddin's office did not immediately respond to a request for comment, but health officials have defended not announcing control measures sooner, saying the authorities did not want to discourage Sabah voters from returning home to cast their ballots.

The hashtags #PoliticiansCauseVirus and #MinisterCluster were trending on Twitter in Malaysia on Friday after ministers and political figures were reported attending public events upon their return from campaigning in the state.

At least two politicians tested positive on the campaign trail, while cases linked to travel to Sabah have been recorded in all 13 Malaysian states.

"Why didn't you quarantine yourself for 14 days?" Twitter user @safiqshahid asked Federal Territories Minister Annuar Musa, who posted photos of himself at a business congress after returning from Sabah this week.

In a statement, Mr Annuar's press secretary denied that the minister had breached quarantine rules, saying he had already completed self-isolation and tested negative days before the election. 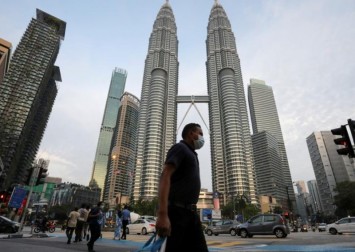 Some Twitter users also raised concerns over risks posed by national elections, which could be called as early as this year amid uncertainty over the stability of the ruling alliance, which has a two-seat majority in Parliament.

Mr Muhyiddin is facing a leadership challenge from opposition leader Anwar Ibrahim, who said last week he had secured the support from a majority of lawmakers to form a government.

Malaysia has reported a total of 11,484 coronavirus cases so far, including 136 deaths.

Meanwhile, opposition Sabah MP Liew Vui Keong died on Friday (Oct 2) at about 11.40am, believed to be from a lung infection, The Star online news reported.

He had initially sought treatment for a slipped disc before the Sept 12 state election nominations. However it is understood that he contracted a lung infection after that.