New Malaysian Prime Minister Ismail Sabri Yaakob waves from a car, as he leaves after the inauguration ceremony, in Kuala Lumpur, Malaysia August 21, 2021.

KUALA LUMPUR - Malaysian Prime Minister Ismail Sabri Yaakob on Friday offered to introduce political reforms including new laws to prevent defections and limit the term of a premier to 10 years, in an effort to win opposition support for his leadership.

The offer comes ahead of a parliament session scheduled for Monday. King Al-Sultan Abdullah, who picked Ismail Sabri as the premier, wants him to face a confidence vote in parliament to prove his majority.

In a statement, Ismail Sabri said his proposals were an effort to establish "a new political landscape."

"The government is of the opinion focus and priority must be given by all parties at this moment towards political stability and the administration of the country in fighting Covid-19 as well as economic recovery," Ismail Sabri said.

His predecessor Muhyiddin Yassin made a similar proposal last month but the opposition rejected it, resulting in his resignation. 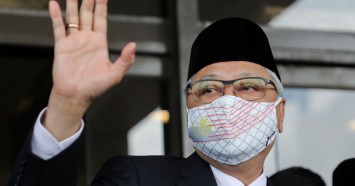 Some of Ismail Sabri's proposals are reforms that the opposition, which was briefly in power between 2018 and 2020, has been demanding for years.

His offer also includes: bipartisan agreement on every bill to be introduced in parliament, input from opposition parties' on a national recovery council and immediate lowering of the minimum voting age from 21 to 18.

He also said the opposition leader in parliament will be given the same remuneration and privileges as a cabinet minister.

Malaysia has seen political instability since the election defeat in 2018 of the United Malays National Organisation (UMNO), which had governed for more than 60 years since independence, due to widespread corruption allegations.

Two governments have collapsed since then and Ismail Sabri's appointment restored the premiership role to UMNO.