Malaysians enjoy taste of travel after lockdown in tourism restart

LANGKAWI, Malaysia - The first plane carrying tourists in more than four months touched down on the Malaysian island of Langkawi on Thursday and was greeted by a twin water cannon "salute", in the launch of a programme to revive a travel sector frozen by the pandemic.

The first batch of 159 travellers from the capital, Kuala Lumpur, arrived eager for a vacation after a months-long, nationwide lockdown imposed to address one of Asia's highest per-capital coronavirus infection rates.

Known for its beaches, geoparks, birdlife and impressive rock formations, Langkawi, a group of 99 islands, is the test case in a drive to allow vaccinated domestic travellers to take part in holiday activities under agreed health protocols.

"My last holiday was last year ... countless months already, I felt like I'll go mental also soon," said Beverly Tiew, 42, from Kuala Lumpur. "So I'm excited and super, super happy and I'm thankful that the government is open about it and we can come and travel."

The project is similar to Thailand, which has opened Phuket and Samui islands to vaccinated foreign tourists, while Indonesia's Bali and Vietnam's idyllic Phu Quoc island plan to follow suit. Malaysia, however, has yet to allow foreign tourists to return. 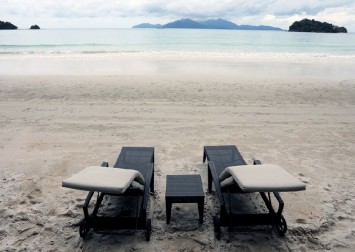 Langkawi, in the Straits of Malacca, is not expecting huge visitor numbers initially, with a target of 400,000 people by the end of the year, and projections they will spend 165 million ringgit (S$53 million).

Malaysia has vaccinated more than half of its 32 million population against Covid-19. It has recorded over two million cases and more than 20,000 deaths.

Visitor Hasan Kamil, 58, said the bubble was well-timed as it came during school holidays.

"This is a good opportunity to bring my daughter for a short holiday because she has been staying home you know for almost two years now," he said.