Malaysians poke fun at 1MDB scandal with 'Kleptopoly' board game

KUALA LUMPUR - A Malaysian board game based on "Monopoly" is taking aim at the massive 1MDB scandal ahead of elections, featuring a motley crew of figures central to the controversy and items allegedly bought with looted money.

Designed by an anti-graft watchdog, "Kleptopoly" sees players move tokens round a board and pick up high-end real estate, with the richest - but least corrupt - participant declared the winner at the end.

The US Department of Justice alleges that US$4.5 billion (S$5.9 billion) was looted from 1MDB, which was founded by Prime Minister Najib Razak, by officials at the state fund and their associates in a campaign of fraud and money-laundering.

Najib and the fund deny any wrongdoing.

Read Also
Najib: I was cleared of any wrongdoing in PAC report over 1MDB 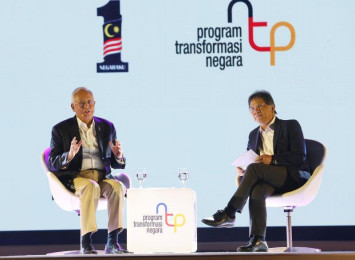 The scandal is in sharp focus as Malaysians gear up for a general election on May 9, with Najib facing a tough fight to extend his ruling coalition's six decades in power.

"We hope that people do play the game, and talk about these issues ahead of the upcoming elections," said Ho Yi Jian, from the Center to Combat Corruption and Cronyism, which produced "Kleptopoly". The traditional tokens used in Monopoly are replaced with cartoon-like characters that resemble figures linked to the 1MDB scandal.

There is a man with a briefcase stuffed full of money called "Malaysian Official 1" - a figure referred to in lawsuits by the US Department of Justice as having allegedly received large sums of 1MDB money. A Malaysian minister has confirmed the term referred to Najib. Then there is "Mr Klepto", a chubby man wielding a large wad of cash who resembles jet-setting Malaysian financier Jho Low, an unofficial adviser to 1MDB who has been at the centre of the scandal. He denies any wrongdoing.

The properties up for grabs in the game include real estate in New York and Los Angeles which the US alleges were bought with money looted from 1MDB.

There is also the luxury yacht Equanimity, which the DoJ says was bought by Low with 1MDB cash. The yacht was seized off the Indonesian island of Bali in February but a court last week ordered authorities to release it, citing missteps by police. Despite its name, Ho said "Kleptopoly" does not encourage players to act like kleptocrats but rather to be corruption-free - if there is evidence of graft, you get sent to jail.