Malaysia's Mahathir to contest Langkawi in upcoming polls, as expected

KUALA LUMPUR - Malaysia's opposition on Sunday named former premier Mahathir Mohamad as their candidate for the island seat of Langkawi, as expected, shifting their election campaign into higher gear ahead of national polls on May 9.

Mahathir, 92, leads the opposition as their choice of prime minister to depose his former protege, Prime Minister Najib Razak, in what will likely be the most tightly-contested polls since independence in 1957.

Wan Azizah Wan Ismail, president of the opposition Pakatan Harapan coalition, said Mahathir had done much for Langkawi, from the time he first set foot on the holiday island as a government doctor in 1956 to the time he ruled as prime minister from 1981 until his resignation in 2003. 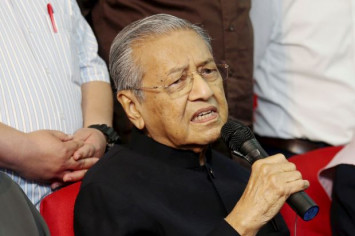 While the electoral system and the absence of jailed opposition figure Anwar Ibrahim appear to favour 64-year-old Najib, analysts predict a tough fight from Mahathir, Najib's old mentor and Malaysia's most seasoned campaigner.

Najib is under pressure to deliver a victory for the Barisan Nasional coalition, as he struggles to appease Malaysians unhappy with rising living costs and a multi-billion dollar scandal at a state fund he founded.

Malaysia's election commission announced last week that polling day would be held in midweek, on Wednesday, May 9, a move that civil rights groups and opposition lawmakers say could favour Najib as it will discourage millions of citizens living abroad from voting.