KUALA LUMPUR - Malaysian Prime Minister Muhyiddin Yassin faced calls to resign on Thursday from the opposition and the biggest bloc in the ruling coalition, after a rare rebuke by the king over the government's handling of emergency ordinances.

Muhyiddin's government said earlier this week that on July 21 it had revoked all ordinances that had come into effect since a national state of emergency was imposed in January.

King Al-Sultan Abdullah imposed the emergency on the advice of Muhyiddin, who had said it was needed to curb the spread of Covid-19. But critics have slammed the move and accused the premier of trying to cling to power amid a slim majority.

In a statement on Thursday, the palace said the revocation of the ordinances was done without the king's consent and thus ran counter to the federal constitution and the principles of law.

Muhyiddin's office said his government had acted in accordance with the law and the Malaysian constitution. 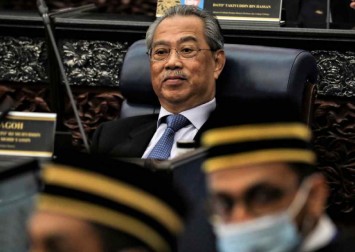 The move comes after over a year of political upset in the Southeast Asian country following the unexpected exit of former Prime Minister Mahathir Mohamad in February 2020 amid infighting in his governing coalition.

Muhyiddin has governed with a razor-thin majority and led an unstable ruling coalition since coming to power in March 2020.

Malaysia is a constitutional monarchy in which the king has a largely ceremonial role, carrying out his duties on advice from the prime minister and cabinet.

Some analysts say the monarch has discretion over whether an emergency should be declared, however. Consent from the king, much revered across Malaysia's multi-ethnic population, is also needed to name a prime minister.

The UMNO party, the biggest bloc in the ruling alliance, called on Muhyiddin to resign for disobeying the king's decree to debate the emergency ordinances in parliament and revoking them without his consent.

Opposition leader Anwar Ibrahim said he had filed a motion of no confidence against Muhyiddin, and claimed a majority of lawmakers no longer supported the prime minister.

Deputy Prime Minister Ismail Sabri Yaakob said the government had the support of 110 of Malaysia's 222 parliamentarians.