KUALA LUMPUR - As Malaysia seeks to move beyond the excesses associated with nearly a decade of rule under former prime minister Najib Razak, one of his pet projects continues to rise irreversibly skyward to become the tallest building in South-east Asia.

Just months from completion, Exchange 106 - or Najib's tower as some locals call it - is one of only a few mega-projects cleared by a new government that has pledged to review deals struck by the previous administration, cut back debt, and root out high-level graft.

Yet the 492m skyscraper remains an irritant as they try to dismantle Datuk Seri Najib's legacy after the May 9 election upset that drove the ruling Barisan Nasional coalition out of power after it had run Malaysia for six decades since its independence from Britain.

They can order that his photos be removed from government offices and that posters carrying his '1Malaysia' slogan be taken down. One staff member at the library of a government agency told Reuters they had even received a directive to "hide Najib's books" by not having them displayed on front desks.

But it doesn't make sense to dismantle a giant skyscraper that is almost finished.

But financially it could still hurt Malaysia. The new government has said funds raised to finance the project by scandal-plagued state fund 1MDB were not used for that purpose, and that its Indonesian developer needed an "injection of funds" from the government to keep the project on track.

"It is better to get the building completed and owned by us than to let it be abandoned," he said.

Mr Lim said he could not disclose how much money the government has put into the project.

Mr Najib could not be immediately reached for comment.

In just his first few weeks back in office, Tun Dr Mahathir has cancelled a planned high-speed rail project between Kuala Lumpur and Singapore, and pledged to renegotiate a deal with Chinese partners to build a 688km East Coast Rail Link.

He has said both projects are too expensive and have limited economic benefit.

Another big property development Bandar Malaysia hangs in the balance after a US$1.7 billion (S$2.3 billion) deal to sell a majority stake to a Malaysian-Chinese consortium fell through in May 2017. A year on, the project has failed to attract any buyers.

Exchange 106 was conceived as the centrepiece of a financial district in Malaysia's capital Kuala Lumpur that would rival the likes of London's Canary Wharf.

The Tun Razak Exchange - named after Mr Najib's father and launched by Mr Najib in 2012 - was expected to be a commercial, residential and leisure hub that would generate a gross development value (GDV) of more than RM26 billion (S$8.7 billion), create 500,000 jobs and lure more than 100 top global companies, marketing documents show. GDV is a metric used by real estate developers to determine how much a property is worth.

However, the plan initially proved a tough sell, according to one source close to the project. 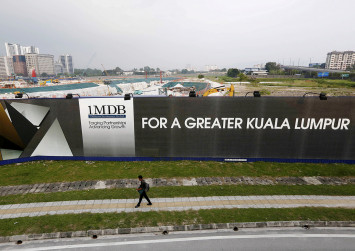 Questions about the finances of project developer 1MDB, a state fund set up by Mr Najib over a decade ago, started around 2013 and by 2015 it had become the centre of money laundering investigations in multiple countries.

In a statement last month, the Finance Ministry said some US$3 billion of debt raised by 1MDB to fund the development of the complex in 2013 was not used for that purpose.

Today, the 28ha site remains largely undeveloped and is dominated by a gleaming tower of glass and steel - Exchange 106 - rising from its centre.

Some big foreign firms have signed up. Banking group HSBC and insurer Prudential plan to move their country headquarters into other buildings on the site, and Australian property firm Lendlease penned a deal to develop a complex consisting of a hotel, residential blocks and a shopping centre.

A number of plots remain unsold, though, and the government is yet to clarify publicly whether it will stick to the initial plans for the huge new financial district.

Prudential declined to comment. HSBC did not respond to a request for comment. Lendlease said in a statement: "We look forward to working with the new government."

As for Exchange 106, the Finance Ministry in March confirmed it had bought back a 51 per cent stake in the building, after initially selling all of it to Indonesian developer Mulia Group for RM665 million.

At the time the ministry said its participation was pre-agreed and was necessary because of the building's strategic location and iconic nature. Mr Lim has since said that the development "needed an injection of funds".

A spokesman for Mulia said around half the building has been leased since it was first marketed back in 2016. She declined further comment.

Local media reported it is mainly local firms that have signed up, with real estate agents saying some parts of the design may not appeal to multinational companies.

For example, Sarkunan Subramaniam, managing director at Knight Frank Malaysia, who has visited the site recently, said unlike other modern office buildings, the floors in Exchange 106 are not raised to allow for underfloor wiring for workstations. That could be a problem for companies that need lots of bandwidth, such as investment banks with big trading floors.

The market conditions also do not augur well for the project.

Malaysia's capital has been experiencing an oversupply of office space in recent years, especially as oil and gas companies have downsized their operations.

With new properties entering the market in the coming years, the vacancy rate for office space in Kuala Lumpur is expected to go up from the current 15 per cent to about 17 per cent, said CBRE-WTW managing director Foo Gee Jen.