Road trips with children can be a chore, especially when there are seven of them. But for a couple in Malaysia, the real nightmare started when they got home and realised that they had left one child behind.

The mother, known only as Iza, 36, told newspaper Harian Metro that her family was making their way from Kuala Lumpur to Malacca on Tuesday evening (July 30) when they decided to make a stop at an Ayer Keroh rest stop.

With seven children in tow, Iza and her husband took turns to eat and look after them.

"When I was eating, the kids were running around so I asked my husband to take them to the playground. At the same time, my fourth and fifth children were fighting, crying and running around, making things worse," Iza recounted in Malay.

While they were piling the kids back into the car, Iza and her husband did not realise that their sixth child, a three-year-old boy, was still sitting on the slide at the playground. 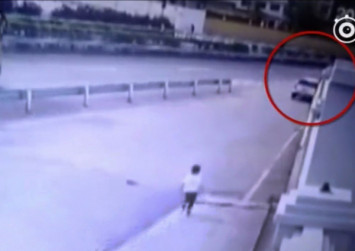 They assumed that the toddler was in the car because they thought that they had heard his voice on the drive back home.

It was only when they arrived home that they realised the boy was missing.

"When I got home and saw that our son wasn't in the car, I felt like my life was knocked out of me, my body was numb," said Iza.

Her husband remained calm and immediately enlisted a friend to look for the boy at Ayer Keroh.

"When we were on the way back to the rest stop 20 minutes later, my husband's friend called and informed us that our sixth son was safe and he was at the Alor Gajah Police Headquarters," said Iza.

The couple rushed to the police station and were relieved to see that their son was safe and sound.

Iza said she was grateful to all those involved in taking care of her children, including an Indian worker who had found her son at the rest stop.