In race to parliament, Malaysia's Anwar faces down critics

PORT DICKSON, Malaysia - Malaysia's Anwar Ibrahim faces the first test of his return to political life on Saturday, in a by-election that would pave his way to claiming the premiership, as promised by prime minister and former foe Mahathir Mohamad.

Anwar, who is expected to win, needs a strong mandate in the fight in the coastal seat of Port Dickson to counter criticism that he is in a hurry to take over from the 93-year-old Mahathir, just five months after being released from prison.

"A bigger margin will give the by-election the appearance of a coronation, something Anwar has been awaiting for 20 years," said Adib Zalkapli, an analyst with political risk consulting firm Vriens & Partners.

"If he wins by a smaller margin, he may be seen as merely riding on the popularity of Mahathir, without winning new support to the coalition."

Mahathir led the Pakatan Harapan, or Alliance of Hope, coalition to a shock victory in a general election in May, unseating his former protege Najib Razak and ending the 61-year rule of the Barisan Nasional coalition. 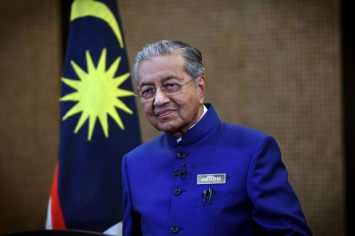 Their campaign focused on corruption concerns triggered by a multi-billion-dollar scandal at state fund 1Malaysia Development Berhad (1MDB), over which Najib and his wife face investigation.

Anwar could not contest as he was in jail on a 2015 sodomy conviction, but his renewed partnership with Mahathir was key to the election win, after which Mahathir secured a royal pardon for Anwar.

The pair have had an acrimonious relationship over two decades sparked when Mahathir, during his previous tenure as prime minister, sacked Anwar as his deputy in 1998. A year later, Anwar was convicted of corruption and sodomy.

Anwar and his supporters maintain that all the charges were trumped up to end his political career.

On Saturday, Anwar faces a motley crew of six contenders, among them his former aide Saiful Bukhari Azlan - whose sodomy accusations against Anwar led to a second jail term for the former deputy prime minister.

Saiful said he was contesting to stop Anwar from becoming prime minister.

"All this is not about the people. It's about his personal agenda to become prime minister," Saiful told Reuters.

Another candidate, Stevie Chan, who has built up a large domestic following on social network Twitter, has also said he was contesting to take a stand against "political entitlement and arrogance".

But 74 per cent of survey respondents would still vote for Anwar, a poll by Institut Darul Ehsan, a think tank set up by Selangor state, which is ruled by his Pakatan coalition, showed.

Anwar has kept up a break-neck campaign, supported by ruling coalition leaders, showcasing the charisma that jumpstarted the Reformasi, or Reform, movement after he was sacked in 1998.

Even Mahathir made an appearance, joining Anwar on stage for the first time in 20 years at a mega-rally on Monday.

Mahathir was the right man to lead the country "in the current situation", Anwar told the rally, in a response to critics who question his ambitions.

"I say this with all humility. I know him, love him as a father and a leader. I fought against him, and now accept he is the best man to lead Malaysia now," he said, to thunderous applause from thousands of supporters.