The recent Wuhan virus outbreak has caused a large outcry amongst some Malaysians, whose xenophobic views and crazy theories have become more prominent than ever, especially among the Malay-Muslim community.

Malaysia confirmed three new cases yesterday (Jan 29), bringing its total cases up to seven, with all of those infected being Chinese nationals.

Since the virus started spreading to other parts of the world, it has gained attention on social media, as well as a rise in Malaysians calling for a ban on tourists from China.

Malaysia announced a ban on visitors from Wuhan and its surrounding Hubei province on Monday (Jan 27).

Despite this, a petition named "Banned People's Republic of China citizen from entering Malaysia" was created on that same evening, saying: "The government should think more about the health of Malaysians". 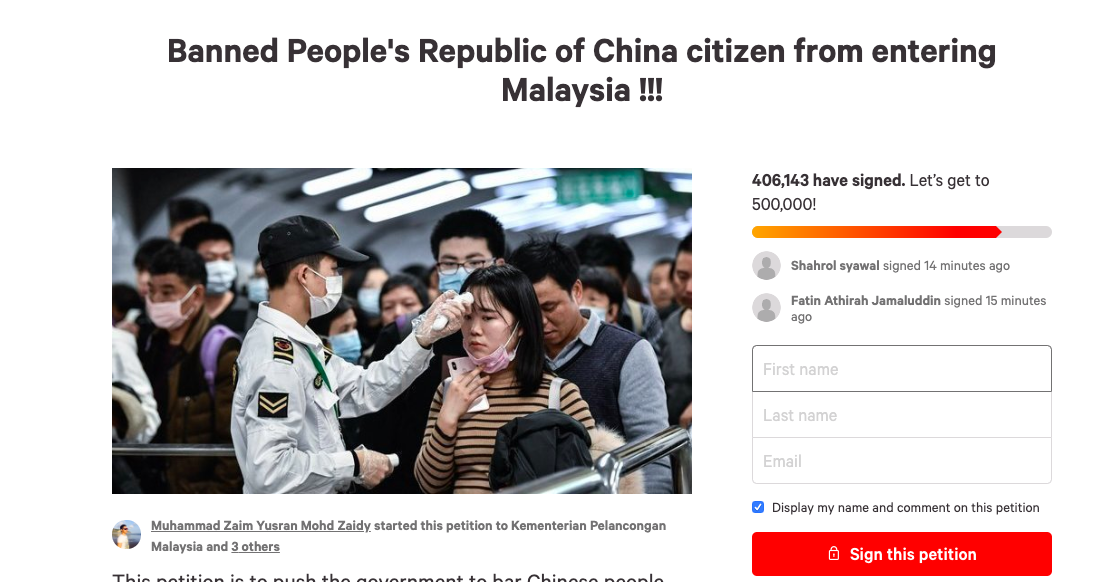 It has since garnered more than 400,000 signatures, with many citing their reason for signing as wanting to protect themselves and their country, and blaming the Malaysian government for a "lack of care".

Petition aside, a large amount of fake news regarding the virus outbreak has also emerged, accusing the government of protecting the country's tourism market rather than the lives of the citizens.

Self-proclaimed financial expert Kauthar Rozmal posted a tweet comparing Malaysia's treatment of Chinese tourists with the Philippines' treatment, accompanied with screengrabs showcasing the Philippines sending 500 tourists from Wuhan back to China while the Malaysian government did nothing.

The now-deleted tweet was shared up to 3,000 times before being taken down. But several copycat posts have appeared since, garnering thousands of shares as well.

According to The Straits Times, opposition Malay figures have alleged that the ruling government, which was previously accused of being anti-Malay and anti-Islam, of being "more interested in tourism dollars".

There were also wild theories that the Chinese-dominated Democratic Action Party (DAP) did not want to prevent Chinese nationals from entering Malaysia as they "could then be given citizenship and voting rights" or that "the disease was being let into the country to reduce the Malay population."

Many of these claims have since been debunked and denied.

"What is happening now is there are too many 'experts' without actual knowledge and social media platforms like Facebook has become a 'political theatre' to take advantage of the situation to cause panic," Zainal Ariffin Omar, president of the Malaysian Public Health Medicine Specialist Association, told The Straits Times.

RACIST OR JUST "BEING CAUTIOUS"?

In Singapore, some netizens seem to share similar sentiments, with multiple petitions popping up on the internet to urge the government to stop Chinese nationals and others who have travelled to China from entering the country.

While such petitions could be seen as xenophobic, "one could argue that they are just being cautious," National University of Singapore sociologist Tan Ern Ser told The Straits Times.

18-year-old Nur Anatasha Abdullah, who created an online petition calling for a ban, told the newspaper: "Even if the epicentre of the virus was from another region, I would still have started the online petition."

Her petition has garnered over 100,000 signatures in four days.

On Tuesday (Jan 28), the Ministry of Health said Chinese visitors with passports issued in Hubei or those who have travelled there recently will be denied entry to or transit in Singapore.