Russian ex-beauty queen posts photos of son, but does not address divorce with Sultan of Kelantan

However, the 27-year-old did not address the status of her relationship with Sultan Muhammad V yet again. Instead, she told fans from Malaysia and all over the world that "you have big hearts, because you accepted and supported me".

The former Miss Moscow, who also goes by the name Rihana Oksana Petra, had insisted last week that she was still married to the former Malaysian king, despite numerous reports that the couple divorced last month following a whirlwind romance.

In her Instagram post on Monday, she said that she was unable to hold back tears of happiness and gratitude as she was writing the post, as she could not believe that she has received many kind letters from people. 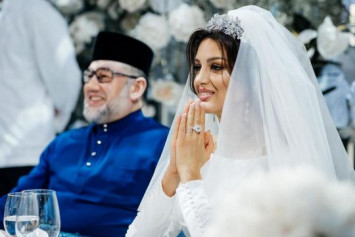 The traditional Islamic divorce, carried out on June 22, was conducted in accordance with syariah laws.

The Kelantan Syariah Court had given its permission for the divorce and it issued the divorce certificate on July 1.

"Ms Rihana was informed of the irrevocable divorce through her lawyers Alexander Dobrovinsky & Partners of Russia and a copy of the divorce certificate was given to her," said Mr Koh, from Eversheds Harry Elias LLP, referring to the Russian.

This follows Ms Voevodina's denial of the split, when she reportedly told Malaysian news portal Malaysiakini she had not been given "any admonition of divorce".

"I was in Russia with my child. We were not in Singapore in June for any divorce proceedings," she said. "This is an act of provocation; we have never been divorced."

The couple's son, Tengku Ismail Leon Petra, was born on May 21, about a year after the couple's surprise marriage in Moscow.

Ms Voevodina said in her Instagram post: "I am so proud that Malaysian blood flows in the veins of my son and I will do everything for him to grow worthy of your love."

She shared two photos of her carrying Leon on Monday, though just like in previous posts, the baby's face remains hidden.

Ms Voevodina added that despite facing "malice, slander and envy" in her life, people who have flooded her inbox with messages have shown that "there is still a lot of kindness left in the world".

"I will keep sharing all the events of my life with you in an open and honest dialogue," she said.

And to her son, she added: "Keep growing and be happy, my little world."