Even as former Russian beauty queen Oksana Voevodina insists she remains married to the Sultan of Kelantan, his Singapore lawyer has confirmed the split.

The traditional Islamic divorce, carried out on June 22, was conducted in accordance with syariah laws. The Kelantan Syariah Court had given its permission for the divorce and it issued the divorce certificate on July 1.

"Ms Rihana was informed of the irrevocable divorce through her lawyers Alexander Dobrovinsky & Partners of Russia and a copy of the divorce certificate was given to her," added Mr Koh, from Eversheds Harry Elias LLP, referring to the Russian.

The statement follows an earlier one by Ms Rihana - who also goes by the name Oksana Voevodina - which said she was still married to the former Malaysian king, days after news emerged that the couple had divorced following a whirlwind romance.

"I have not been given any admonition of divorce," she reportedly told Malaysian news portal Malaysiakini. "I was in Russia with my child. We were not in Singapore in June for any divorce proceedings."

She added: "This is an act of provocation; we have never been divorced."

Following a whirlwind romance that has enraptured and befuddled Malaysia, Sultan Muhammad V and Oksana Voevodina have divorced after 1 year of marriage. http://str.sg/ot4g

She had previously shared a video on Instagram revealing intimate details of her relationship with the 49-year-old Sultan. In the video posted last week, Ms Rihana, 27, said: "I will take care of him, and of course, I want to be the last person in his life, and I want to live with him until the end of my life."

It is not clear when and where the video was filmed but it had garnered more than 195,000 views and over 1,500 comments as of Friday.

The couple were said to have married on June 7 last year when Sultan Muhammad V was the Malaysian king, but it was only months later that video clips of their wedding reception made the rounds internationally. 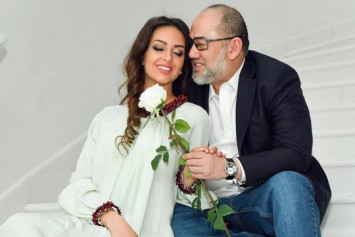 Last Wednesday, the New Straits Times reported that the divorce was registered on July 1, adding that its sources said a copy of the couple's divorce certificate making its rounds on social media was genuine.

The certificate, which bears the Kelantan state crest and is marked as the copy of the wife, indicates that the divorce was done through the utterance of the word "talaq" three times - the most severe and irreversible form of divorce in Islam.

The news came barely two months after the couple's son, Ismail Leon, was born, and only about a year after the pair's surprise marriage in Moscow.

Mr Koh said: "There is no objective evidence as yet as to the biological father of the child. On behalf of His Royal Highness, we request his privacy be respected."

I have not been given any admonition of divorce... I was in Russia with my child. We were not in Singapore in June for any divorce proceedings... This is an act of provocation; we have never been divorced.

MS OKSANA VOEVODINA, who denied the divorce in an interview with Malaysian news portal Malaysiakini.

Though the palace has not made an official comment on the matter, last Tuesday it issued a statement laying out the correct use of royal titles.

"Please be informed that no one can be called Kelantan Queen, Kelantan King, Sultanah Kelantan or Queen of Kelantan without any official announcement from Istana Kelantan," the palace said. It did not mention Ms Rihana.

THE SULTAN AND HIS RUSSIAN BEAUTY

June 7, 2018: This is the wedding date for the King and former Russian beauty queen Oksana Voevodina, according to an Instagram post she would later write in June 2019. He is 48 and she is 26. Other reports mention her name as Oxana Gorbatenko.

From late Nov: Rumours emerge of the secret marriage, with some social media reports showing pictures and videos of the alleged ceremony.

Nov 29: Asked by reporters about the wedding, Prime Minister Mahathir Mohamad says: "I don't know. I don't have any official confirmation."

Jan 2, 2019: Tun Dr Mahathir writes a blog posting titled "Rule of Law" indicating all Malaysians were bound by the laws of the land. "There is no provision which exempts anyone from the rule of law. For the rulers, there is a special court, but the laws are the same as the laws applicable to ordinary citizens.

"It is disturbing to see blatant breaches of the law being perpetrated in the mistaken belief that immunity has somehow been accorded."

It is not clear what "breaches of the law" he is referring to, though it is generally presumed it is about the Sultan's refusal to formally announce his marriage.

Jan 6: Sultan Muhammad V steps down as the 15th King, the first Malaysian monarch to abdicate. The title of Agong or King is rotated every five years among the nine Malaysian royal houses, but he abdicated after just two years. He remains ruler of Kelantan state.

June 4: Ms Voevodina starts posting on Instagram, using the handle rihanapetra. She posts seven pictures on this day - three of herself and the Kelantan ruler, and one showing a pair of baby's feet.

She announces that she gave birth on May 21 to their son, giving his name as Tengku Ismail Leon Petra Tengku Muhammad V Faris Petra.

She would later upload eight other Instagram posts and stories, some showing the couple together.

She says in a video posted in July: "I want to be the last person in his life, and I want to live with him until the end of my life."

Mid-July: Reports emerge, including in mainstream media, that the Sultan has divorced Ms Voevodina.

July 20: The Singapore lawyer for Sultan Muhammad V formally confirms the divorce, carried out on June 22, saying it was conducted in accordance with syariah laws.

She had earlier told Malaysiakini news site that she was still married to the ruler.