"She has difficulties understanding the language," read a note from her daughter's English teacher.

For Gwen Kaur, a Malaysian mum whose child had always "scored As in her English exams and won best reader awards since preschool," it was appalling to learn that her daughter's teacher had said otherwise.

One can only imagine Kaur's surprise when she received a handwritten note from said English teacher explaining his remark — in broken English.

On Monday (Dec 2), Kaur shared a photo of the slip of paper in a Facebook group where it garnered over 400 comments from equally shocked netizens.

In her now-deleted post, Kaur wrote that the teacher had given her daughter a grade of Tahap Penguasaan (TP) 4, which meant that the girl's mastery of the English language was slightly above average, according to this classroom assessment guide.

TP ratings are similar to those of Mastery Learning, a popular alternative method of teaching found in after-school programmes such as Kumon.

When the concerned mum asked the teacher to explain the grading, he left her a note.

In it, the teacher gave the reasoning behind his "sentense", saying that while he "no doubt to agree (sic)" that Kaur's daughter was well-spoken, he found other issues with her ability.

He elaborated on how "English of knowledge not for communication (sic)" and that "Communication English is diffirent (sic) from knowledge English."

Netizens were left speechless and baffled at his poor grammar and spelling, with many questioning what "English of knowledge" and "communication English" meant.

While some agreed that a TP rating was rather subjective as it's based on a teacher's assessment of a student's abilities, rather than that of a standard exam paper, they felt that the teacher wasn't even qualified to grade Kaur's daughter with his poor command of English. 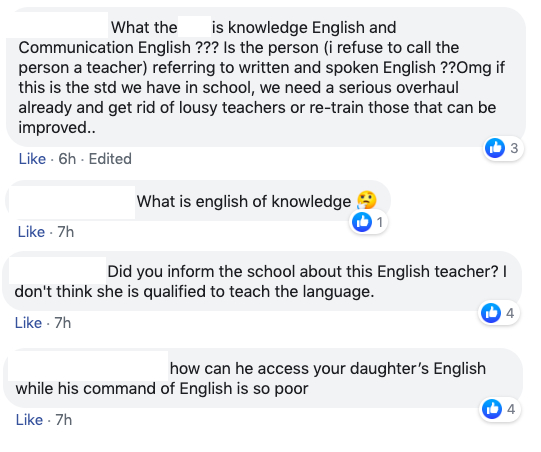 According to the education ministry, Malaysia's Education Blueprint from 2015 to 2025 plans to improve English proficiency among both teachers and students through the English Language Education Reform.

#Teachers #Students #Facebook #Education and Schools #In Case You Missed It