In yet another video clip, a healthcare worker in Malaysia was caught administering the Covid-19 vaccine incorrectly on Sept 30.

She was seen filling up a syringe, holding it up to the camera to show the amount within, and telling a 12-year-old boy's mother that he was taking 0.3ml of the Pfizer vaccine.

However, things went awry after she disinfected his left arm with alcohol — the medical staff picked up the wrong syringe and proceeded with the jab.

A close-up of the inoculation showed the nurse pushing a plunger that was already depressed, which meant that the barrel of the syringe was empty.

Netizens who watched the video called for the authorities to look into the matter, with some asking if the staff on duty was too tired.

On Oct 2, Malaysia's Covid-19 Immunisation Task Force — Adolescent chairman Datuk Dr Noor Azmi Ghazali confirmed that there was a human error during the vaccination that took place at the University Malaya vaccination centre.

An empty, unused syringe had been used instead of the other syringe the medical staff had filled earlier.

After the injection, she realised her mistake and informed the medical officer on duty at the vaccination centre.

The medical team then explained and discussed the issue with the boy's parents who allowed their son to receive the Covid-19 jab on his other arm, Dr Noor Azmi said.

As for the staff involved, she has been warned to be extra careful and follow the procedures during vaccination.

"The existing procedure has also been improved by ensuring that no other syringes are on the table when administering the injection. This is to prevent the same incident from happening again," added Dr Noor Azmi. 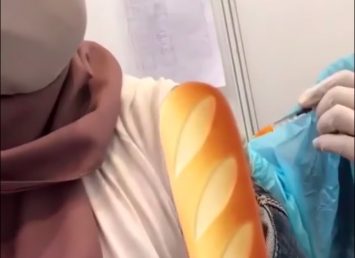 On July 28, a video clip went viral as it appeared to show the vaccine still in the syringe after the needle was withdrawn from a woman's arm in Kuala Lumpur.

The video caption read: "Maybe the officer was so tired that she forgot to press the syringe… maybe."

Amid public concern over the improper administration of vaccines, Khairy Jamaluddin, Malaysia's minister in charge of the National Covid-19 Immunisation Programme, said in July: "Go ahead and record so that you'll have hard proof that you have received the proper dosage for vaccination."

According to official data, 87.6 per cent of adults in Malaysia are fully vaccinated against Covid-19 as of Oct 3.