Umno says will not work with PM Muhyiddin in polls

A man stands in front of a United Malays National Organisation (UMNO) logo at its headquarters in Kuala Lumpur, Malaysia on Oct 26, 2020.

Muhyiddin’s 13 months in office have been beset with infighting and a leadership challenge from opposition leader Anwar Ibrahim, amid the Covid-19 pandemic that has wrecked havoc on the economy.

Umno, or the United Malays National Organisation, is the largest bloc in Muhyiddin’s ruling alliance, but some of its leaders have been unhappy playing second fiddle to the premier’s own party and have called for early elections.

Muhyiddin, who came to power with a slim majority in parliament, declared a nationwide emergency in January to focus efforts on fighting the pandemic, though his critics say he did so to stay in power.

Umno president Ahmad Zahid Hamidi said the party will contest elections as part of the Barisan Nasional alliance it leads, and not cooperate with any other parties.

“We will not be part of Perikatan Nasional as a party. This resolution is final,” Ahmad Zahid said at the party’s general assembly on Sunday referring to Muhyiddin’s ruling coalition.

Elections are not due until 2023 but under pressure from Umno, Muhyiddin had said earlier this year he would hold elections as soon as it was safe to do so amid the pandemic. 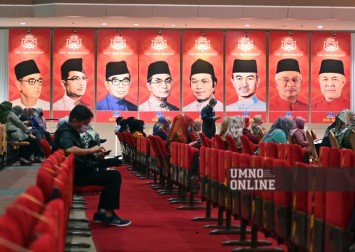 Some defections from the opposition have boosted his support in parliament.

“From our viewpoint, maybe it’s 2023 because they have enough members of parliament now,” he said.

Several Umno leaders, including Ahmad Zahid, were charged with corruption after the party lost power in the 2018 elections - their first loss since Malaysia gained independence from the British more than 60 years ago.

Former Prime Minister Najib Razak, also from Umno, was last year sentenced to 12 years in jail for corruption in a case linked to the multi-billion dollar scandal at state fund 1MDB.

He has consistently denied wrongdoing and has appealed the court verdict.