New videos of a fatal traffic accident that left one Malaysian bus conductor dead and 13 injured, including 11 Singaporeans, were uploaded by Facebook user Freeman Tan onto KL吹水站's Facebook page.

The new videos show passengers in the immediate aftermath of the accident which saw a coach ramming into the back of a gravel lorry on the Karak-Kuala Lumpur Expressway near Kuala Lumpur on Saturday (April 7).

In the video taken by one of the passengers on the bus, the passengers are shown to be surveying the damage done after the collision, as they attempt to get out of the wrecked vehicle.

In another video taken from outside the bus, the severity of the collision can be seen.

The entire windscreen of the bus was completely gone from the impact of the collision, and its left side severely damaged as well.

The Singaporeans involved are aged between 19 and 81 years old, reported The Straits Times.

A spokesman for the Selangor Fire and Rescue Department said it was alerted to the incident at about 3.30pm.

The spokesman added that all the injured victims were conveyed to Selayang Hospital in the Gombak district of Selangor state for treatment, and most of the victims suffered light injuries.

Singaporean Yip Keng Yim, 19, one of the passengers on the bus, told Bernama news agency:

“It happened so fast and everybody was thrown off their seats.”

Ms Yip was with her parents, a cousin and an aunt at the time of the incident.

The family was on its way back from Genting Highlands.

Said Ms Yip:“After boarding the bus, I was not able to sleep because it was being driven at high speed. Suddenly, I heard a loud crash, and then everybody fell off their seats.”

She sustained facial injuries and revealed that her father also suffered a serious leg injury.

A witness, photographer Kong Chong Yew, 32, said that he was on his way to Genting Highlands when he realised that there was a massive jam on the other side of the highway where the accident had happened.

He said that the bus had crashed into the back of the lorry, and many people had gathered around the accident site as he drove past, adding:

“The windscreen was already gone, and the left side of the bus was badly damaged.“ 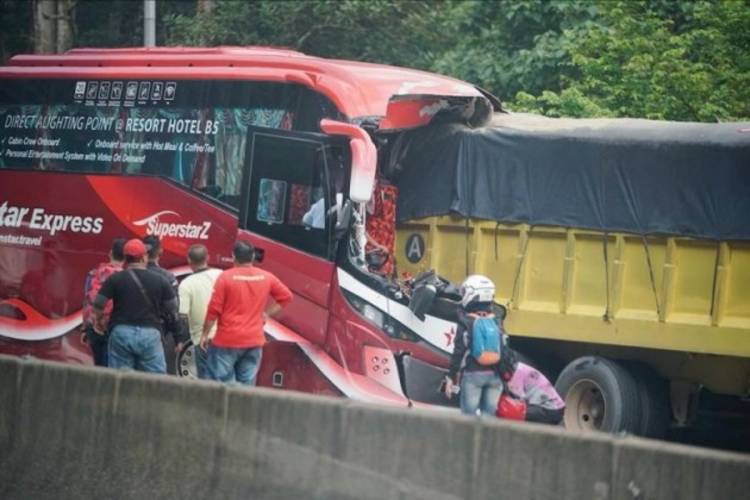 According to The Straits Times, it is believed that the bus driver had lost control of the vehicle, causing it to ram into the lorry ahead.

The bus conductor identified as Mr Carles Lagan, 26, was trapped near the front of the bus and died on the spot, reports China Press, citing the Gombak district police.

The cause of the accident is still under investigation.

Watch the videos by Freeman Tan below.