Four people have been confirmed to have the Wuhan coronavirus in Malaysia.

The first three Chinese citizens, who entered Malaysia via Johor Baru, are the wife, 65, and grandsons of a 66-year-old man from Wuhan, who is currently being treated in Singapore for the same virus. The children are aged 11 and two.

“The three positive cases are related to the 66-year-old man from Wuhan, China who was confirmed positive (for the virus) in Singapore,” Datuk Seri Dr Dzulkefly told a news conference.

The fourth case is a 40-year-old man from Wuhan, China, who was part of a tour group that travelled by bus to the southern state of Johor from Singapore on Wednesday, Noor Hisham said. The man had suffered from fever the next day and sought treatment at a hospital in Johor.

Tests by Malaysia’s Crisis Preparedness and Response Centre confirmed he was suffering from the coronavirus.

“He is currently experiencing fever and cough, but his condition is stable,” Noor Hisham said in a statement.

The three earlier patients have since been transferred to Sungai Buloh Hospital in Selangor, and are being treated in isolation wards, he said.

All three are in stable condition and exhibiting light symptoms such as a dry cough, he added.

The boys’ mother, who tested negative for the virus, is staying in the hospital to take care of them.

The patients were reported to have boarded a plane from Guangzhou to Singapore on Jan 20, said Dr Dzulkefly.

The 66-year-old man and his son tested positive for the virus and were admitted to hospital in Singapore on Jan 22. 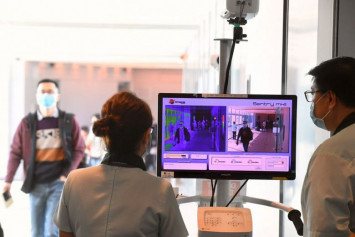 There were a total of nine people in the group who were travelling together with the first male patient: his wife, son, daughter-in-law, two grandsons and another family of four comprising husband and wife and two children.

Apart from the 66-year-old man and his son who were hospitalised in Singapore, the seven other travellers were allowed to leave Singapore and on Jan 23 travelled to Johor, where they were quarantined while awaiting test results for the virus.

Initial tests had found that they were not exhibiting fever or any other symptoms.

Apart from the three confirmed cases, the other travellers tested negative for the virus and were sent back to China on Saturday morning, said Minister Dzulkefly.

Despite the spread of the disease globally, Prime Minister Tun Dr Mahathir Mohamad said that the government did not plan to ban China tourists from entering the country.

“We will not block (China’s tourists) but we will check them, we will make sure,” he told reporters.

“We are able to detect very early stages (of the virus) even if there is no increase in their temperature but there is evidence they suffer from this virus,” he said.

“We will intensify our level of preparedness, we are on high alert,“ said Dr Dzulkefly, adding that the Finance Ministry has also pledged additional funds in the event of an outbreak.

Malaysia Airports said in a statement today that it was working closely with the ministry to screen international passengers at its airports, including carrying out thermal screening and allocating special medical bays for quarantine purposes.

It also reminded travellers to be safe and wear a mask at all times and to use hand sanitiser.