10 mega-sized condos in Singapore for families that need space

One of the silver linings of the pandemic is the rediscovery of time for people. Less commuting has resulted in people spending more time at home, and through that, many are reevaluating what their needs are from a home.

Chief among them is the requirement to have more space – something which you aren’t going to find in many of the new launches today.

So naturally, that attention has been turned to developments with big expansive land.

There are definitely many advantages of large plots of land – more space for kids to play, you can run or walk within the grounds in a safe environment, and even the open views do give rise to a better headspace for people.

For these buyers, we’ve put together a list of the 10 biggest condo developments – by sheer land size – that you can find in Singapore:

ALSO READ: 5 family-sized new launch units under $1.3m if you need space but are on a budget

Number of units: 918 units inclusive of non-residential; this is a mixed-use development

At an average quantum of between $1.3 to $1.4 million, these are probably the most affordable way to get a massive amount of living space.

HUDC flats are also rare, as there were only an estimated 7,731 units built before the scheme ended.

Besides the sheer amount of space, Braddell View boasts access to no less than three different train lines: the North-South Line via Braddell MRT (600 metres or a nine-minute walk), and the Circle Line and Thomson – East Coast Line via Caldecott MRT (610 metres, or a 12-minute walk).

The main issue confronting buyers will be lease decay. This project is passing its 40th year, so there isn’t much in the way of resale prospects. Aesthetically, some buyers may not like that Braddell View is hard to differentiate from regular HDB blocks, at first glance.

This is the condo next door to Reflections at Keppel Bay. In case you’re curious, Reflections is much pricier (see below).

As you’d expect from the land size, every unit here is impressively big – the smallest is about 893 sq. ft., and they go all the way up to a massive 4,652 sq. ft. (for the penthouse units). 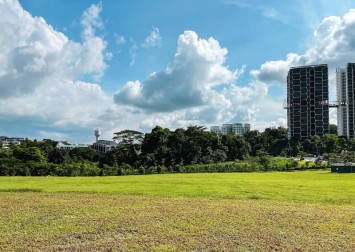 Even so, Caribbean at Keppel Bay is one of the few ways to have a large, District Four home for under $2 million. Take particular note of the bigger two-bedders (1,270 sq. ft.), which can sometimes go for around $1.75 million.

The other highlight, besides being close to Sentosa, is access to VivoCity and two MRT lines. Telok Blangah MRT (Circle Line) is just 660 metres away, or a nine-minute walk.

Harbourfront MRT – attached to the VivoCity mall – is 840 metres away, or about a 10-minute walk. This station is on the Circle Line, as well as the North-East Line.

And it goes without saying, that the main highlight would be its waterfront views.

In recent years, Mandarin Gardens has become best known for its ferocious resistance to en-bloc sales. Even despite a mind-boggling price of $2.9 billion was not enough to tempt owners to achieve the 80 per cent required for a collective sale.

For those who don’t mind the lack of en-bloc prospects, however, Mandarin Gardens offers very affordable units for their price. Some of the smallest 732 sq. ft. units have sold for as low as $710,000, while even the larger 2,024 sq. ft. units barely break $2.1 million.

Unfortunately, Mandarin Gardens lacks MRT access. The closest station will be Siglap MRT, which is likely to be finished in 2023. For now, you’ll have to use the bus or drive.

There’s also a lack of “across the road” amenities, with the closest food and supermarket being in Siglap Centre (710 metres, or around 20 minutes on foot).

This immediately ceases to be a problem if you drive though, as Parkway Parade and the lifestyle hub of Katong are less than seven minutes by car.

The main issue for buyers, in any case, is going to be the condo’s age. It’s nearing the 40-year mark, and we already know there’s resistance to an en-bloc.

Bayshore Park is adjacent to two other large condos, The Bayshore and Costa Del Sol. The recent uptick in price is from the new Bayshore MRT station, due in 2023.

This is a Thomson – East Coast Line station that’s just 480 metres away, or about nine minutes on foot. Prior to this, Bayshore Park and its neighbours were highly inaccessible. 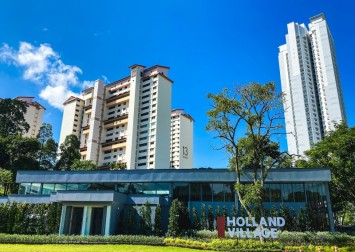 You can also get a nice seafront view, but this depends on the unit in question – the better views are typically from the 10th floor and up, and some are slightly impeded by neighbouring developments.

There aren’t many amenities in the area, barring small convenience stores in the condos nearby (and a large preschool, The Alphabet Playhouse, that’s just a 10-minute walk away).

Along with the lease decay, Bayshore Park is a condo for true home buyers who want space and maybe a seaview; but it’s not so much for investors.

“Two-bedder” is a misleading term in Clementi Park, as most of the two-bed, two-bath layouts are a jaw-dropping 1,346 sq. ft.

We spotted asking prices of only around $1.75 million for some of these; and coupled with efficient layouts (no long wasted corridors), you can see why this would be attractive to large families.

If your budget stretches to $3 million, some of the three-bed, four-bath units might be reachable; these go to an impressive 2,368 sq. ft. Most units come with a good amount of balcony space, for those who like the open air.

Sunset Way has long been a foodie hotspot, with a good mix of different cuisines. People travel out of their way just for the restaurants here. What isn’t great is the lack of any other amenities.

There is no bus stop nearby, no MRT station, and hence also no malls (Clementi Mall is over a kilometre away). There are no ongoing plans to change any of this, so Clementi Park is out of the running for question who doesn’t drive.

While Clementi Park is an old condo, its freehold status makes up for this.

Realtors usually bring up Cashew Heights for its school access, and proximity to Cashew MRT station. What’s less often highlighted is the development’s size. Units are big for their price, occasionally dipping just below a $2 million quantum for a 1,658 sq. ft. unit.

Cashew Heights has no less than six schools, within 740 metres or under:

There isn’t much in the way of other amenities, but Cashew MRT is just 590 metres away (about a nine-minute walk); so you’ll have easy access to the Downtown Line.

Ultimately it is the mammoth land size with relatively little units that will attract families, that open space available is a definite plus point.

ALSO READ: How much do you really need to buy your first condominium in Singapore?

We have a full review of Reflections at Keppel Bay here.

Reflections at Keppel Bay is an architectural icon, and more or less exemplifies luxury condos in District Four. What many people may not realise is that Reflections has very large, ‘90s style unit sizes, despite being completed in 2011.

We probably don’t need to tell you that Reflections isn’t the cheapest condo, and never will be.

Expect a quantum of around $2..6 million to $2.7 million for most of the three-bedder units; but the two-bedders will probably get more attention.

The 1,055 sq. ft. units (two-bed, two-bath) have been spotted with asking prices of just over $1.6 million, which may be palatable to buyers as it’s close to the average new-launch price; and 1,055 sq. ft. is sufficient for families (it’s bigger than the average four-room flat, which is about 980 sq. ft.).

In terms of location, it’s almost the same as Carribbean at Keppel Bay (see above). The difference is it’s slightly further from Harbourfront MRT and VivoCity, at 910 metres or a 12-minute walk. It’s closer to Telok Blangah MRT, which is 590 metres or an eight-minute walk.

We have a full review of The Interlace on Stacked.

Another architectural icon, The Interlace is probably the best-known condo in the Alexandra area. It’s situated along a designated green belt, and the unique layout is meant to optimise the sense of open living; so the end result is a condo with a very Bukit-Timah style vibe.

As we mentioned in our review, the unit mix is diverse; but most of them are quite large by current standards. There are two-bedders that can go up to 1,292 sq. ft.

Read Also
5 new-launch 4-bedroom condos in the Core Central Region for under $2,500 psf 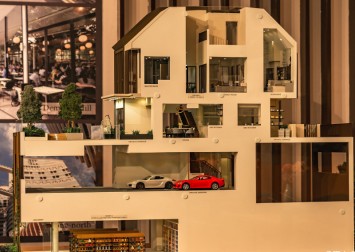 What will appeal to a wide market, however, are the 1,001 to 1,076 sq. ft. two-bedders; these have been spotted with asking prices of between $1.4 million to $1.6 million. The Interlace will stand out, compared to much smaller new launches at the same price.

That said, The Interlace is mainly a condo for drivers.

There’s no MRT station nearby or mall nearby; even Alexandra Central (620 metres) is close to a 15-minute walk on foot. Still, one could argue that’s part of the appeal – buyers who enjoy this location don’t really want noisy malls and crowds nearby.

Incidentally, The Interlace is just a 3.8 km drive (under seven minutes) to One-North, which could make it convenient for anyone working there.

We have a full review of Sommerville Park here .

If you are looking for a home in the Holland area you probably will have a selection headache, with a plethora of new launches to choose from. But if you’re looking for a bargain, and don’t mind old properties, resale options like Sommerville Park will stand out.

In particular, note the 1,302 sq. ft. units (three-bedders), which have recently gone up with asking prices of $2.5 million. We’ve also spotted real transactions of $2.39 million and $2.4 million for these same units in 2021; and we’d call it reasonable today for a freehold, District 10 property.

While there are no real amenities within walking distance, Holland Village is only over a kilometre away, or about a six-minute drive. The Tanglin Halt area is a little bit further (1.3 km drive), but it only takes about eight-minutes on the road.

The chief concern is a potential oversupply of newer condos here, many of which are closer to the Holland Village MRT station. As such, we don’t think many investors would consider Sommerville Park right now.

But pure home owners could find it a viable alternative to current, pricey District 10 launches.

Loyang Valley has been a moneymaker for landlords for decades (right up till Covid-19). As most realtors can tell you, this is one of the top condos if you want to get rent from airport workers, next to Changi Court and Changi Green.

As with most old condos, Loyang Valley is built big. The three-bedder units are commonly around 1,528 sq. ft; and with asking prices at $1.2 million or below, they’re among the most affordable big homes.

Along with the recent development of Changi Business City, home buyers have started to take notice. 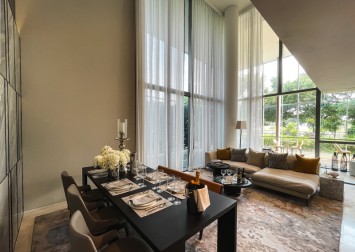 Loyang Valley is only a 10-minute drive to Changi City Point, and a nine-minute drive to the airport; an attractive proposition if you work in these places, or consider the airport a useful amenity (it has the Changi Jewel and a huge range of restaurants; and many of them are open 24/7 when it’s not Covid-time).

Loyang Valley’s accessibility issues will also see a solution in 2029; this is when the Loyang MRT station opens practically next to it. Until then, however, this is mainly a condo for those who drive.

The age of Loyang Valley is a concern though; and the investment-minded will worry about its en-bloc possibilities. Being so close to the airport, it may be faced with height restrictions that dissuade developers.