12 tallest skyscrapers in Singapore and around the region

Ever wondered why, in movies and TV shows, Godzilla never attacked Singapore? In 2021’s Godzilla vs Kong, the 120-metre-tall monster attacked Hong Kong instead. Maybe one reason is that Hong Kong, like many cities in the Southeast Asian region, have taller buildings than us.

The reason is far simpler: For safety reasons, due to air traffic control restrictions, Singapore’s maximum height limit for buildings is 280 metres (with maybe some exceptions for buildings in the Marina Bay district).

Since Sept 3 is Skyscraper Day, where architects, planners, developers, engineers, historians and contractors commemorate the birth anniversary of Louis H. Sullivan (“father of modern skyscrapers”), 99.co thought it would be good to expand on our previous Singapore skyline skyscraper article a bit more – particularly our 12 tallest buildings, and several taller ones around our region.

Formerly known as Tanjong Pagar Centre, Guoco Tower is the only skyscraper in Singapore’s skyline exempted from the height restriction of 280 metres. It houses the rooftop Urban Park, Wallich Residence apartment complex and a hotel by Sofitel Hotels & Resorts.

Wallich Residence comprises 181 one, two, three and four-bedroom apartments with condo facilities like a pool deck, fitness corner, swimming pool and so on.

It also includes four penthouses and one super penthouse, which comes in the form of a triple floor duplex on levels 62 to 64.

The latter was famously owned (and sold) by British inventor Sir James Dyson at one point. For anyone living on the upper penthouses of Wallich Residence, the sky’s literally the limit.

Joint 2. UOB Plaza One and the upcoming CapitaSpring

The United Overseas Bank Plaza comprises of two towers, with its taller twin – the UOB Plaza One – once sharing the joint number one positions with OUB Centre (now One Raffles Place) and Republic Plaza before Tanjong Pagar Centre (now Guoco Tower) took over the spot.

UOB Plaza One links to Plaza Two via a 45-metre (148 feet) six-storey podium and four columns. For many Singaporean residents, the podium’s large airy atrium linking Raffles Place to the Singapore River is a popular meeting spot.

To be completed by the second half of 2021, CapitaSpring is an integrated development that comprises 29 floors of Grade A offices, with eight storeys dedicated to a 299-unit Citadines serviced residences managed by The Ascott Limited.

Seventy-five per cent of the residence are studio apartments, with the rest being loft studio, one- and two-bedroom apartments. It’ll also include facilities like a swimming pool, jacuzzi, running track, gymnasium, yoga deck, social kitchen, lounge and barbeque pits.

The top 29 floors offer panoramic views of the Singapore River and Marina Bay. It even has a 35-metre Green Oasis of lush greenery and trees, spread out over four storeys. For trivia buffs, CapitaSpring cameoed in the third season of HBO’s WestWorld.

The former OUB Centre changed its name to One Raffles Place after the completion of the new, adjacent (and shorter) 38-storey commercial tower in 2012.

The building gained quite some publicity when famous Frenchman Alain Robert climbed up to the 21st floor of the tower, before being dissuaded by police, in November 2000.

While Singapore isn’t in an earthquake zone, Republic Plaza was incorporated with earthquake-proof features.

The top of the tower houses an executive club, which includes guest rooms and facilities.

Other interesting facts about it (if you’ve been inside) include 15 double-decker lifts and a four-storey-high main lobby. Fun fact: the building was completed in under two years – not bad for a skyscraper in our top five.

Capital Tower has five shuttle double-deck lifts, which allow passengers on two consecutive floors to use the lift simultaneously. Not only do they occupy less building core space, but double-deck lifts also improve efficiency especially when passenger traffic reaches a certain load.

Capital Tower was initially planned as POSBank’s headquarters but was later transferred to CapitaLand as their flagship building. The top floor of the tower, which is occupied by the members-only China Club, has a bar, restaurant, dining rooms and meeting rooms.

As one of the second tallest residential developments in Singapore, the Altez (together with Skysuites @ Anson) occupy the Singapore skyline, offering residents panoramic views of the city and sea.

It’s just a two-minute walk to Tanjong Pagar MRT station and includes a direct link to the Icon Village mall (which includes Cold Storage supermarket) on its ground floor.

ALSO READ:  Is this boutique freehold property at East Coast a good buy?

Sharing joint seventh position with Altez and located along the same Enggor Street in Tanjong Pagar, Skysuites @ Anson was completed about a year after Altez. It occupies a slightly smaller site area than Altez with more floors despite sharing the same height.

It includes a relaxation area with gardens and a hot spa called The Retreat at level 56 and a 360-degree viewing Vista Deck on the top 72nd floor.

Condo facilities like the 50-metre lap pool, tennis court and gymnasium are located on level seven and a fitness alfresco with kids’ play area on level 31.

While many who drive past these two developments would often confuse one with the other (since they’re on the same road and has the same height), one way to differentiate the two is to identify the rooftop – Skysuites @ Anson has a circular roof design (ie. Vista Deck), while Altez’s more angular.

Alternatively, you can just differentiate the two based on where Icon Village is.

It’s purpose-built to house renowned international banks like Barclays Capital, Credit Suisse, Deutsche Bank AG, Societe Generale and UBS. It includes a link to Raffles Place MRT station via the Retail Link and another to the Downtown MRT station.

The design of the towers is unique because they are sheathed in a glassy, transparent curtain wall – where a slight greenish tint creates a sense of lush greenery.

A mixed-use development with the promise of a waterfront lifestyle, The Sail comprises two towers – the taller 70-storey Marina Bay Tower (or Tower 1) and the shorter 63-storey Central Park Tower (or Tower Two).

Read Also
Which districts have the highest increase and decrease in prices over Covid-19? 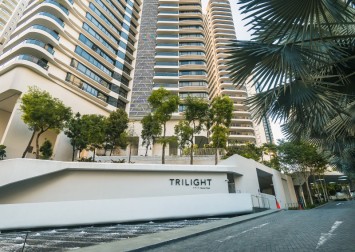 The land parcel was originally sold as a “white site” by URA, so developers CDL and AIG Global Real Estate, dedicated the first two levels for retail and kept the rest for residential use.

When completed in 2008 (Marina Bay Tower) and 2009 (Central Park Tower), The Sail was the first residential development in the New Downtown Core, boasting five penthouses, the largest of which is 9,000 sq ft.

Here’s a bit of trivia: Did you know the original plan for the Marina Bay Tower was 69 and not 70 storeys? Who knows, if it had stayed that way, it may not have made the top 12. Good thing they added an extra level.

Facade-wise, the Marina Bay Tower stays true to its name, having a glass design that resembles a sail.

Erected using complex civil engineering techniques by contractor, Dragages Singapore, The Sail required careful construction as it was located above an MRT line and unstable soil.

It has since become a remarkable engineering icon and deserves its spot on the Singapore skyline.

While there are three office towers, two residential towers and retail space (Marina Bay Link Mall), the tallest among them is Tower Two, which is where multinational firms – IBM, American Express, The Macquarie Group and so on – have their offices at.

The shortest among them is Tower One (186 metres/611 feet, 33 floors), and you can recognise it immediately as it is fully leased to Standard Chartered Bank with its logo being quite prominent on its facade.

Tower Three is the second tallest among the five (239 metres/784 feet, 46 floors), and counts DBS as an anchor tenant. You can’t miss it with its logo on the building.

Naturally, anyone staying in either of these residences would also love to be working in any of these office towers. Furthermore, all five towers are connected to the mostly subterranean Marina Bay Link Mall for retail and dining options.

According to architect Kohn Pedersen Fox, the towers are positioned to maximises the office perimeter views of the bay, with a central city park to link commercial, residential and retail in a public, outdoor space.

Read Also
URA Master Plan for property buyers: How to read and understand it 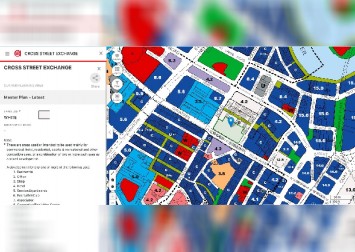 Built on the site of the former Ocean Building, this development retained its name, including many of its former tenants (mostly financial (duh) institutions).

Here’s a bit of trivia for you: the building features a large solar array on its rooftop and used to house the Honorary Consulate of Cyprus on its 37th floor.

According to its architect, Pelli Clarke Pelli, the tower’s design celebrates Singapore’s maritime heritage, with a facade reminiscent of a ship’s sail.

The tower’s curtain wall has alternating bands of glass and metal panels to enhance the building’s gently curving form. Each metal panel comes with LED lights, which explains why the facade glows at night.

Tallest buildings around our region

In the continuing spirit of Skyscraper Day, here’s a quick list of the tallest skyscrapers around our region: