The highest transacted price was $1.21 million for a five-room DBSS unit at Natura Loft in Bishan.

SINGAPORE - The Housing Board resale market started the year on a strong footing as prices rose for the seventh consecutive month in January, according to flash data from real estate portal SRX released on Thursday (Feb 4).

Last month, a total of 13 Housing Board resale flats also changed hands for at least $1 million.

The highest transacted price was $1.21 million for a five-room Design, Build and Sell Scheme (DBSS) unit at Natura Loft in Bishan Street 24.

The strong demand for public housing has continued to prop up resale prices and is expected to be sustained in the coming months with prices rising further by 2 to 5 per cent this year, said Ms Christine Sun, senior vice-president of research and analytics at OrangeTee & Tie.

"Demand for HDB resale flats seems to be outpacing supply now, as evident by the high subscription rates of recent Build-To-Order (BTO) launches and increasing resale transactions," she said.

The bulk of the sales volume came from four-room flats, which made up 41.7 per cent of all sales transactions. Five-room flats accounted for the second-largest flat type at 26.2 per cent, followed by three-room flats (21.5 per cent) and executive flats (9 per cent), with two-room flats making up the remainder.

It is the eight consecutive month that sales volume has hit above 2,300 units.

ERA Realty head of research and consultancy Nicholas Mak noted that the resale price index had increased steadily over the same period.

"The rising price index indicated that the typical sellers are asking for higher prices and the buyers are willing to pay the higher prices," he said.

Mr Mak noted that some HDB resale flats were sold above their valuation amounts, which meant that buyers paid cash to the seller for the difference between the transaction price and the valuation amount, adding that such cash-over-valuation transactions would accelerate the rise in HDB resale prices.

Some newer and more expensive HDB flats which recently completed their five-year minimum occupation period and came onto the market could also have been a contributing factor, he said. 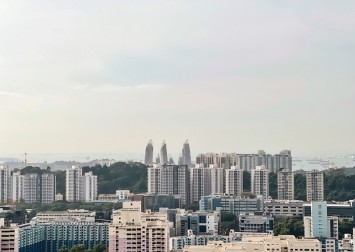 Sharing the same assessment, PropNex head of research and content Wong Siew Ying noted that nearly a quarter of the resale transactions last month involved flats with a lease balance of more than 91 years.

Analysts said the resale market is likely to stay strong this year, even as the Government said recently that it is monitoring the property market closely.

Said PropNex's Ms Wong: "We maintain a relatively positive view of the HDB resale market but the continued market recovery is not without risk... We remain watchful of policy risk, as any fresh cooling measures will likely have an impact on the HDB resale market, given that HDB upgraders form a sizable demand pool for private homes."