It took just three days, after viewing what would be his future home, for Wong Jing Yean, 32, to place a bid of $1.07 million — the highest bid for the Bishan HDB flat — on April 7.

The unit is one of the 480 in Natura Loft, a Design, Build and Sell Share (DBSS) project at Bishan Street 24. Located on the 20th storey, it comes with a panoramic view of the city skyline. The 5-room apartment spans a spacious 1,300 sq ft too, SRX reported.

The search for this unit had not been a walk in the park for Wong. Having to hunt for houses as the Covid-19 pandemic grew in severity before the circuit breaker meant reduced viewings in order to abide by social distance requirements, he told The Straits Times.

It took viewing up to 20 five-room flats and maisonettes ranging between 1,300 sq ft and 1,700 sq ft in size before Wong and his wife, 32-year-old Chee Suet Yee, were able to find their dream home.

"We have started a family, so we needed a big unit," Wong shared, explaining why he was willing to shell out for the million-dollar price tag. "Most of the ones we saw were in older estates, and over 20 to 30 years old."

The pair have two young children, both of whom are younger than three years old. According to him, the unit boasts double the space of his previous unit in Jewel@Buangkok. His new purchase at Natura Loft also just fulfilled its five-year minimum occupation period in 2016, with 90 years left on its lease.

As a large DBSS unit in a prime location at the city fringe — all the ticks in the making of a million-dollar flat — the hefty price tag was "an attractive price point", as Wong puts it.

"We looked at the historical prices for our block. $1 million was the market price. We also did a bank valuation of the unit, and it was above $1 million, so we are not significantly overpaying.

The pair did, however, have to delay their resale completion by about two months, due to the circuit breaker.

What was normally an eight to 10 weeks progress took four months to complete, Wong added. 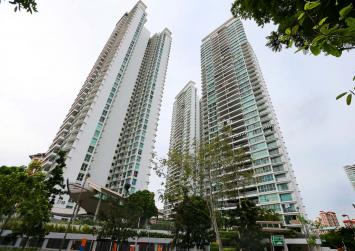 "We submitted the application on April 28, and HDB acknowledgement typically takes one to two weeks, so we should have got it by early May. But because of the CB, we received the acknowledgement only on June 14. As a result, the resale process was completed only in early August."

According to Wong, the delay itself was not the biggest challenge — time was. The pair had been staying in a rental flat with a lease due to expire in August, which would have tied up perfectly had they gotten their keys and completed renovation the same month.

"Fortunately, we were able to extend our rental lease for two more months. But we have to fork out another $7,000 to $8,000 for rent because renovation works will be completed only in late October or early November."