A common marketing tactic in real estate is to slap "selling fast" on new launch websites.

We tend to assume that what starts well will also end well — so any property that's selling out quickly must, by conventional thinking of "wisdom of the crowd", will also end up being a top performer in the resale market. In practice, that doesn't always pan out.

Sometimes, even if condos had a slow start (which could be due to various reasons), they can still pick up the pace later on. In general, people like to see condos selling well before taking the plunge themselves.

If it only sells 10 per cent of its units at launch, the typical thinking is that it must have something wrong with it, right? Well, that's not always true.

In this list, the following condos all saw slow sales at launch, but have since done much better than most would have expected.

The following condos sold less than 30 per cent of their total units within the first six months (considered slow by industry norms).

However, based on resale transactions up to May 2022, these projects have seen profits in at least 90 per cent or more of all transactions.

Percentage of profitable resale transactions: 99 per cent (181 gains, one loss).

To be fair, Sims Urban Oasis was launched in phases so it's not as if it could totally sell out in one go. But even with its phase of 200 units, it only sold over 100 units of those — not exactly very stellar results.

The biggest issue at that time was the slow and subdued market (it was on its way down to the bottom of 2017).

There were also two other factors that could have contributed to the slower sales:

First, it's a mega-development with over 1,000 units; and the high unit count is coupled with a heavily built-up area. There is not much greenery or open space in the surroundings, and it was thought family buyers wouldn't appreciate that.

Second, there was some concern that it's within a 10-minute walk of the Geylang vice area. In actuality, Sims Urban Oasis is far enough that this isn't an issue — but property buyers are always a bit cautious of the Geylang area. Vice aside, some buyers also find the area a bit run-down and crowded.

Sims Urban Oasis has since boomed, however, thanks to Paya Lebar's transformation. This condo is a six-minute walk from Aljunied MRT, and from there it's just one stop to Paya Lebar Quarter (PLQ). This is an area loaded with malls and Grade A offices, making Sims Urban Oasis of renewed interest to landlords.

As some residents can also attest, Sims Urban Oasis is in great proximity to several foodie areas, many of which are open till late (our red-light area is possibly even more famous for its food).

That said, Sims Urban Oasis still lives up to its namesake: It's a condo for urbanites, who don't mind being surrounded by concrete. It's convenient, newer, and better priced than many Paya Lebar area counterparts; but at the cost of less green space.

Percentage of profitable resale transactions: 100 per cent (138 gains, no losses).

Sales of The Panorama were so slow, that Wheelock Properties took a $110 million hit on the project for 2013. The main reason was a softening of the property market at the time. MAS had announced new cooling measures in January 2013, as well as Total Debt Servicing Ratio (TDSR) restrictions.

Read Also
10 stunning, profitable condo transactions in the past 5 years 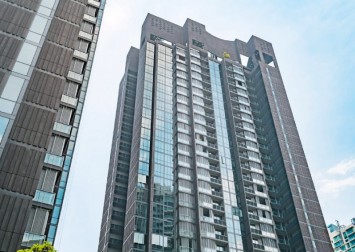 The Panorama was especially affected by this, as the perception was that it would be pricey (high-end condos tend to bear the brunt of cooling measures first). Wheelock Properties has a reputation as a high-end, luxury developer; and this was coupled with their high bid for the plot: $550 million for the Ang Mo Kio GLS plot.

Sales of The Panorama only picked up when the price dropped from a median of $1,343 psf, to an astounding $1,200 psf.

This likely accounts for the high number of profitable transactions today.

Even back then, a new, high-end condo below $1,300 psf would have been a steal — so the original buyers had a windfall.

Location-wise, The Panorama's main highlight is proximity to the venerable CHIJ St. Nicholas Girls' School, which is only a five-minute walk. It's also within a six-minute walk to Mayflower MRT, on the Thomson-East Coast Line.

The slow initial sales at The Trilinq can be summed up in one phrase: void strata space. We've explained before how this is a potential money-waster, but to summarise: Units have a high floor-to-ceiling ratio, and this vertical space counts toward what you buy.

Some of the Triliinq units have huge amounts of void space — there are living rooms where the floor-to-ceiling height is an impressive six metres. Perhaps this paid off for buyers in the long run, however, as resale gains have been solid. We have to admit the tall ceilings create quite the impression, and are rare outside of penthouse units.

That said, it apparently was part of the developer's plan to sell slower over the course of the three-year construction period, instead of trying to sell out in a month.

The other factor to consider is the ABSD deadline. Trilinq was one of the condos that were in danger of missing the five-year deadline (the estimated ABSD payout plus interest would have been $50.9 million).

The Santorini, like The Panorama, suffered from the introduction of TDSR curbs near launch.

There was demand for this property; but the bulk of units sold, during Santorini's launch weekend, were mainly its smaller one and two-bedders.

This was likely due to the lower quantum, which was essential for new buyers seeking to meet TDSR limits (the smallest one-bedder units were only around $500,000 at launch). The larger units, however, proved challenging to move over the next two years.

It was thought at that point that the market was beginning to get saturated with too much supply of mass-market projects, and that there was quite a lot of new supply in the area as well.

The Santorini also had to contend with an ongoing problem: this condo has no MRT station within walking distance, and it's primarily for those who drive.

Nonetheless, resale gains have been strong thanks to ongoing developments in the Tampines area. The Santorini is less than a 10-minute drive to Tampines Central, which is a major retail cluster that also has a lot of Grade A office space.

At current prices of around $1,240+ psf, this is a viable alternative to pricier and older condos closer to the centre of Tampines.

Percentage of profitable resale transactions: 99 per cent (85 gains, one loss).

Principal Garden seems angled mainly toward investors: Around 70 per cent of the unit are smaller one and two-bedders, while the project also features dual-key units.

The trouble is, the shoebox craze had peaked in 2011/12; and by the time of Principal Garden's launch in 2015, we were bombarded with news media about how shoebox units had oversaturated the market; and investors began to worry about resale prospects. 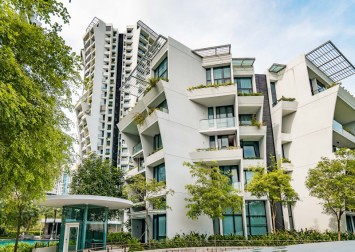 There was also lots of nearby competition from Ascentia Sky, Echelon, and Alex Residences.

Principal Garden had news media that boasted brisk sales; but bear in mind that these numbers were for phased launches (e.g., the developer only put out 200 units on launch weekend).

This is a common tactic used when developers are less confident, as it helps to create the impression of fast sales. As you can see from the numbers above, the take-up rate for the first six months was low.

Nonetheless, Principal Garden has done well over the years. This could be down to numerous factors such as the gentrification of Tiong Bahru (Redhill MRT is about a 10-minute walk from this project, and it's one stop from Tiong Bahru MRT).

Perhaps another reason is the 80:20 approach used by the developer, where 80 per cent of the plot is landscaped greenery.

Such generous allocations are a rare find these days, especially in the urbanised RCR. Sometimes, what you see in renders isn't quite enough, and seeing it in real-life can make all the difference.

The main gripe from buyers, at the time of The Skywoods launch, was the leasehold status. The Skywoods' closest neighbours at the time included condos like Dairy Farm Estate and Hazel Park, which were freehold condos selling at significantly less.

This was compounded by the launch date. The introduction of TDSR, close to The Skywoods' launch, meant some buyers found that they couldn't meet the requirements to buy The Skywoods. This made it tough for the sales team to shift units, until prices were lowered in 2015.

(We have more details on the pricing changes for The Skywoods in this earlier article.)

Since those days, however, it's been smooth sailing for The Skywoods. Improvements in the area, such as the opening of Hillview MRT nearby and Rail Line developments, have helped to boost the price. You can find out more about The Skywoods today in this article.

There are other condos that fared poorly at launch, but have since performed well

Property prices move for many reasons, from ongoing trends, to markets adapting to new measures.

We can't identify the specific reasons for each of these situations in one article; but it just goes to show, that launch-day sales aren't always a good indicator of what's to come (even though sometimes it does take some price discounts).