7 affordable waterfront condos and cluster houses in the West

Last week, I listed out seven areas in which you can find waterfront HDBs (as well as tips for people looking to live by the water). As you can probably tell by my property hunt journey so far, I’m the type that likes to leave no stone unturned in my search.

So this week, I’m returning to three of these seven areas to look at the private housing nearby to give you a better idea of your options for a waterfront lifestyle in the West. (For more info when deciding between resale HDBs and condos (resale/ new launch), do check this out).

There are many condos around Jurong Lake that have great lake views. Of course, waterfront living isn’t just about water views – if not, an apartment on a high floor in, say, Telok Blangah could also be considered a waterfront property!

It’s also about the lifestyle that comes with being by the water, such as being able to stroll to the waterfront where one can usually find various recreational activities such as kayaking and cycling (think Bedok Reservoir) or lots of restaurants (such as those at Robertson Quay – Robertson Quay condos are not included in this series as I’m not sure many people find the properties there affordable!).

Honourable mention amongst the Jurong Lake condos goes to Lakefront Residences, a 99-year leasehold condo built in 2014 (lease starting from 2010) by Keppel Land with 629 units spread over 17 floors.

What’s great here is that the back gate is linked to Lakeside MRT by a sheltered walkway and it’s only a five minutes (or so) walk from Jurong Lake.

Read Also
A first-time homebuyer's journey: My search for waterfront views with review of Waterfront Isle 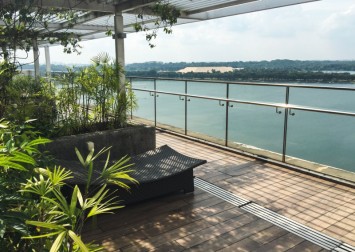 Moreover, with an asking psf (at the time of writing) of $1,147 – $1,803 psf, Lakefront Residences still has many years left on its lease (i.e. No need to worry about lease decay at this point in time) and yet still has a significantly lower entry psf than the nearby Lake Grande, which was completed about five years after Lakefront Residences (more on Lake Grande below).

Click here to see a unit at Lakefront Residences with a view of the water and here to see a video that extensively showcases the condo’s facilities – saves you a wasted trip to view a unit if you don’t like the look of the development in the video!

Personally, I rather like how lush and green the landscaping of Lakefront Residences is. (Concrete jungles like Waterview at Tampines Quarry/Bedok Reservoir just aren’t for me.)

Other condos in the vicinity with lake views include (note this is a non-comprehensive list):

Lake Grande – I was initially going to focus on Lake Grande in this article, as it’s one of the newest condos around Jurong Lake.

However, with an asking psf of $1,490-$1,982 at the time of writing, I’m not sure it’s really the right choice for an article on affordable housing. After all, there are freehold condos in central Singapore going at that price!

Completed in 2019 (lease starting from 2015) with 710 units, 8 of the stacks have unblocked lake views (albeit separated from the development by a large road) and I love how the developer (MCL Land) has maximised the lake views throughout the unit.

So the lake can be seen from not just the living room, but also the bedrooms. And of course, there is also a balcony to maximise your enjoyment of the water. (Yes I know balconies are controversial but waterfront living is about being outdoors, so how can a good waterfront unit not have an outdoor space?) Click here to see what a lake-facing unit looks like.

Next door to Lake Grande is Lakeville (99 years from 2013) – nice facilities, slightly older (696 units completed in 2018, also by MCL Land) and so slightly cheaper, with an asking psf of $1,255-$1,858 at the time of writing. Fun fact: you can see the lake from the lift lobby of some of the blocks so, even if your unit isn’t water-facing, you still get to enjoy a bit of the surroundings.

ALSO READ: Are good views worth the premium? Here's a short study on 6 different condominiums

Parc Oasis – the architecture of this condo is rather unique (or dated, depending on how you look at it) with its curved windows so its not a development for those who like their units nice and square/ rectangular.

Around Pandan Reservoir: The Vision

In one of my earlier articles (on Waterfront Isle at Bedok Reservoir ), a kind reader left a comment asking me to check out the Vision at West Coast for affordable waterfront living so I’m duly doing so in this article. (Just so you know that at Stacked, we do read and take note of your feedback!)

The Vision (TOP 2014 but with a lease starting from 2008) actually overlooks the open sea waters of West Coast, so it’s not quite Pandan Reservoir, but being just down the road, I figure The Vision works for this article too.

(FYI, it’s mainly HDB blocks around Pandan Reservoir although some condos such as Twin View and Parc Riviera may overlook both Pandan reservoir as well as the neighbouring Sungei Pandan/ Pandan River.) The current asking psf of The Vision ranges from $678 – $1,862 psf (at the time of writing). The Vision has 4-storey cluster housing inside the development, hence the particularly low psf of $678.

It is across from West Coast Park so you have nature at your doorstep, but the road in between is quite large (at least 6 car lanes, I believe, and what with so many factories being located in this area, probably a lot of heavy vehicles too).

I’ve actually been to West Coast Park for a walk several times and, even at 7 am in the morning, there are stretches along the sea where the ships – or machinery, I only remember that it was basically something industrial – are still running (rather noisily as well) so you don’t really feel like you’re “one with nature.”

Nonetheless, when walking along the nicer bit of West Coast Park during my morning walks, I did think that it would be nice to live in one of the condos opposite West Coast Park.

However, this was before I saw the Bedok Reservoir condos! Everything else being equal, at this point in time, I prefer the location of the Waterfront series condos opposite Bedok Reservoir – the surroundings are much more tranquil and Bedok Reservoir is larger than West Coast Park, with more things to do. (Fast food fanatics: you do get McDonald’s opposite The Vision but not much else.)

However, I’m sure things will change as the Great Southern Waterfront develops. In fact, last month, the 1st section of Pasir Panjang Park was opened (see below for how all the parks will eventually link up.)

If you’re looking for a waterfront condo with a long time horizon in mind, The Vision (or one of the nearby condos) may be something to consider, and I’d definitely like to do a review of the entire condo and its facilities once I manage to get a viewing slot.

(For those who like their privacy, The Vision has only 295 units so much fewer than Waterfront Isle or any of the Jurong Lake condos mentioned above.)

Other condos opposite West Coast Park with sea views include:

Sea Hill – 338 units (according to Property Guru although Srx states that Sea Hill has 478 units) completed in 2016 with its lease running from 2011. Like The Vision, Sea Hill has condos and houses (townhouses) but also SOHO units and serviced apartments within the development.

Since this is a post on affordable waterfront living in West Singapore, I was planning to include the condos around Pang Sua Pond as well.

However, after looking around, none of the condos here seem to offer a waterfront lifestyle (be it in terms of water views or access to the waterfront/ waterfront activities) so I’m skipping the Bukit Panjang condos in this article.

See you next week, where I’ll be taking a look at the condos alongside Kallang River. It’s the longest river in Singapore – 10 km of water that flows from Lower Pierce Reservoir to the Kallang Basin. So there’ll be quite a few developments to cover!